I finished last week's post by saying we were going out for the evening, (That was Thursday), so today I will start from there.

At the start of December, Mojacar launched a campaign to get recognition by the tourist board, with an aim to win a Ferrero Rocher competition to light up a town. Six small towns made the short list and Mojacar was one of them. They arranged several community fun projects to raise their profile, and had a big presence on social media, asking everyone in the surrounding area to vote for them. Well their campaign was successful and they won the competition, and in just a couple of days, Ferrero Rocher adorned every railing, balcony etc with sparkling gold lights. There was also a lovely light tree in the square. This was of course, excellent advertising for FR, but also good for tourism in Mojacar at a time that is usually their low season. And it did attract huge crowds, but we held back as neither of us are keen on the crowds, nor do we enjoy driving after dark. But Mojacar decided to keep the lights up until February, so when our son came out, we thought it would be a nice outing to go up and see them, and Jonathan was happy to do the dark driving.

It was a very cold night and we went early so we could get the little one home and in bed before it got too late. So when we arrived it was very quiet with few folk around. They were arrivng as we left!. We saw the lights switch on as the sun went down and they were very pretty. Every balcony and railing was draped in gold . 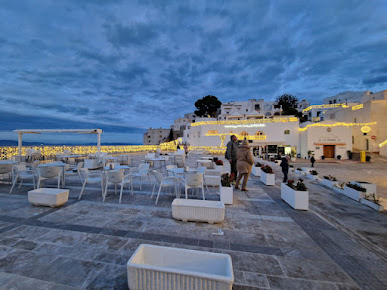 In the square there was a lovely tree. It was much more sparkly than it looks here. 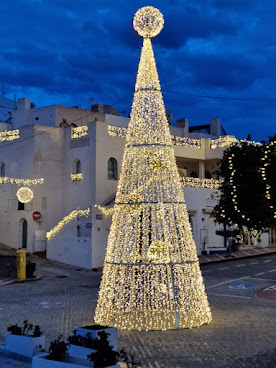 This was on the side of the ancient church, and they had decided to keep that lit way past Christmas too. 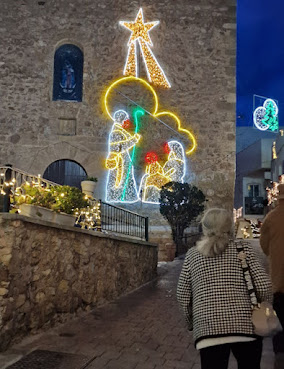 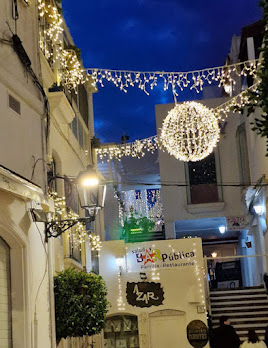 I liked this arch of lights at the top of the road from the square. 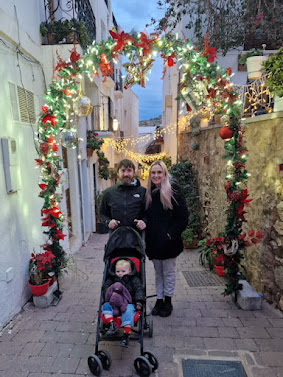 The top plaza was bright with strings of light, but it was too cold to stand and admire them for long. 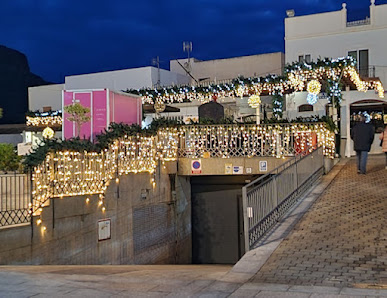 Also on the top plaza there was a lit star for framing photos, so of course we made use of it. 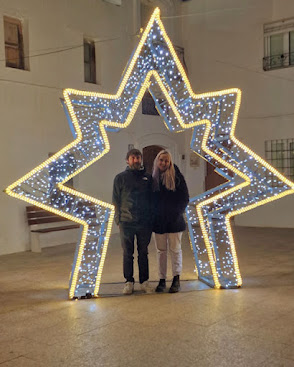 Just before the lights came on, I took this photo of the view from the first plaza looking over towards the coast and Garrucha Town. 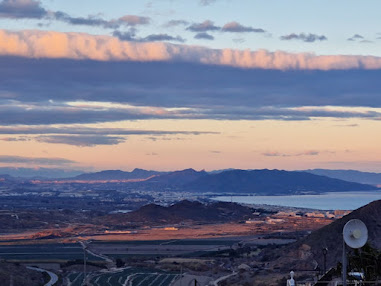 The rest of the week passed quickly. Jonathan and Chris together cut up, shredded and binned all the mess from the trees they cut down and it looks so much better now.

Little A was a bit under the weather for a couple of days, with a high temperature, but she was very good, and even learned a few new words during the week.

On Friday Jonathan had agreed to drive me over to Alicante (two and a half hours drive from here), to collect Leo, as the breeder said he was ready to go. Here he is and he is such an adorable ball of fluff. He is actually much smaller and younger than I had expected, but he eats solid food, uses a litter tray and climbs well. He likes the climbing tree that we bought for Tolly and uses the scratching poles which is encouraging. He likes to sit on the back of my chair and often falls asleep there, or else between my legs.  He eats well, plays hard and sleeps hard, so I fit what I have to do around what he is doing for now. He is only two and a half months so has plenty of growing and filling out to do. here is a collage of his first week. 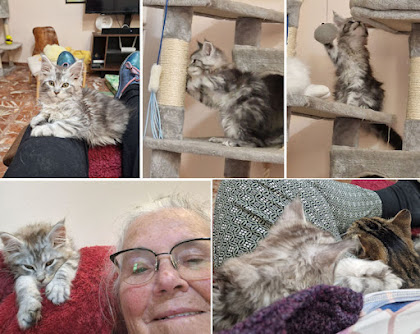 The other animals are not too sure about this little intruder but Kim ignors him, and Tango and Tolly will now settle in the same room as him even if they are not ready to make friends yet. One evening Luna came on my lap and fell asleep there, and Leo jumped up too, so they both laid there, but there was a bit of a hissing match when they woke up! It is all fun for now.

For now I keep him in my craft room if I am too busy as he is not allowed outside yet, and I don't want the others to 'gang up' on him. He plays on all my stuff so it pays me to put anything important away properly. When I am on my computer he likes to sit on my shoulder and watch the movement on the screen, but I have to lock my keyboard whenever I leave him so he doesn't edit my posts! 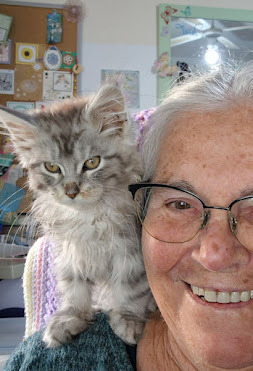 This week has flown by with lots of extra bedding and towels to wash, and some crafting and computer time to catch up on. As soon as we have dismantled A's cot and cleared out the little spare room, I will settle Leo in there so he has somewhere safe to go when I am not around. As soon as I sit down I let him out to join us again, and that seems to work.

Today I have had a long chat with my son Ben, and tomorrow maybe I will get a catch-up session with my sister. And that is how it rolls for now. So I will save this now, ready to link up with Annie's Friday Smiles in the morning.

A very quick post today as my son is here with his wife and little girl so I don't want to spend too long down here on my computer. But I have a few photos to share. My little grand-daughter is used to animals and has a big staffie at home, so she wasn't phased by Kim's size, and he is so gentle anyway. But she has really fallen in love with Tango. He is so laid back that he will tolerate a lot of cuddles and stroking, and when he has  had enough, he just takes himself off to hide for a while. A. Hasn't taken any notice of the other cats; just Tango. 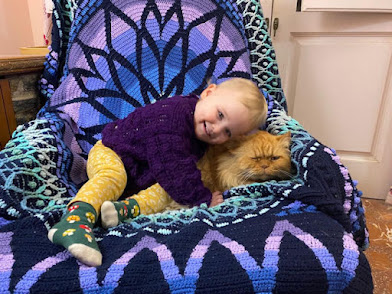 Unfortunately their first day with us was rather wet. We did manage to walk around the market, but then the rain started and stayed all day, which doesn't often happen here. So we were happy to see the sun shining and a blue sky the next day but they were a bit surprised at how cold it was, although I had warned them. So on Wednesday it was even colder then usual, and looking from our back railing, we could see snow on the higher slopes of the Cabreras. 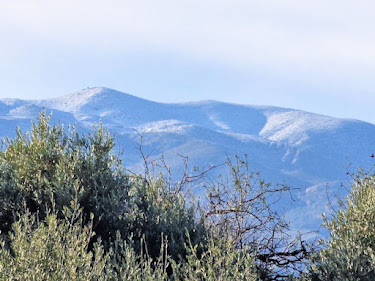 We have only seen snow this far down a couple of times. It was unusual enough for Facebook to be flooded with photos of it, so here is one from a friend who lives  higher  up the mountain. Certainly a novelty for the locals. 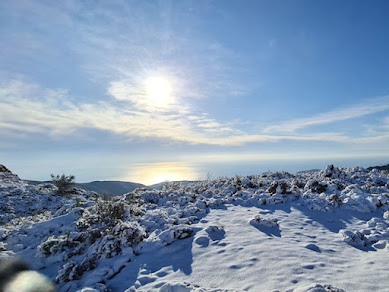 The snow has gone now and we have a slightly windy but sunny day. I was up quite early, just in time to catch a lovely sunrise. 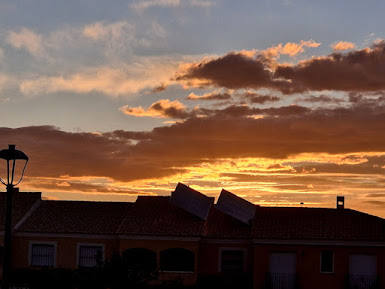 Our son Jonathan used to be a tree surgeon, and one of the reasons for his visit, (discounting the obvious family reasons), was to help Chris in the garden. Between our porch and the back railing there is a tiny square of soil where we had a very pretty tree, and also a shrub that I grew from a small cutting when my friend moved back to UK. It took almost too well and grew much too tall, so it towered above the tree. But this year the tree died and Jonathan has cut it down, along with the shrub which we are hoping will now grown more bushy, and not so high. Then between them they chipped the huge pile of debris so we could bag it us and put it in the street bin. 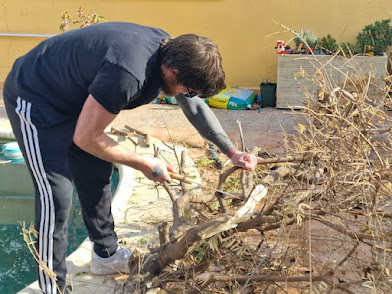 It has made a big difference to the light in our bedroom and in the porch fly-free area. The little path that runs behind this square of earth is where the hedgehog was hiding in a big pile of dead leaves. It looks so much better now it is all cleared up. 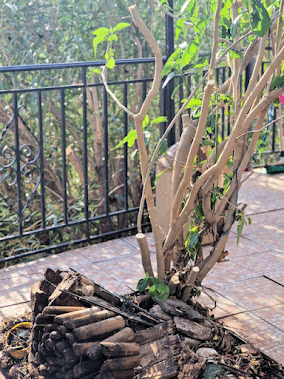 I enjoyed some Grandma cuddle time while we watched Grandad and Daddy working outside. 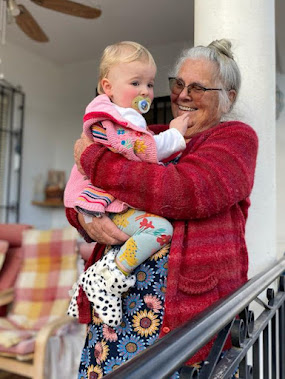 Tonight we are going out together for a while, and tomorrow Jonathan is driving me to Alicante to collect my little Leo (Maine coon kitten), which is very exciting, so that is all I have time for this week. I will link up with Annie's Friday Smiles and I am sure there will be photos to show you next week.