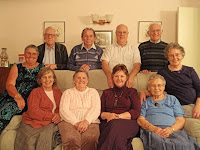 I am now safe and sound back home in Spain, so here, as promised, is what happened in the second half of my UK break. But first, here is the photo of the 'Gathering of the clan' which I wrote about last time. We were in Eve and John's house, using the 'self-take' function on my camera. The quality isn't fantastic, but it's not bad. I will e-mail or post a copy to those who were there, as soon as I can.
I had a lovely weekend staying with Jim and Jo in Wolverhampton. They made me feel very welcome and it was good to spend time with all the 'children' who are growing up fa 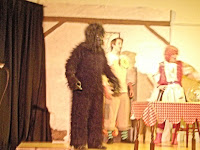 st. The pantomime at the church was great fun. Jim was dressed as a gorilla which made one child cry! That was a bit unfortunate as he made a lot of appearances, but he managed to show a wide range of emotions with just body language and voice. Jo was a 'Granny' and she was very good! Hannah was a mouse being chased by Dick Whittington's cat, and Marcus was an official on the island of cheese! Amias stayed at home with me for Friday evening and Saturday afternoon, and then he came with me to watch on Saturday evening. It was all good fun, and raised a sizeable sum of money for the church fund. I went to the service at the church the next morning, and then we all went out for lunch.
Ben came over to collect me in the evening and I spent Sunday and Monday nights at his house. Again I was made very welcome. Monday was Ben's birthday and I gave him his scrapbook which he loves. He read all the little messages in it that night and was 'moved to tears' (his words), so I am glad I finished it in time. We spent the day wandering around Birmingham which was rather nice. I gather Dave isn't really up for shop browsing, and I hadn't been there before, and don't 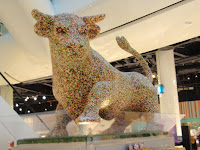 have malls of big shops to 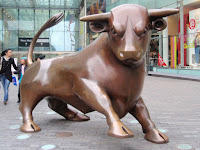 visit here, so we both enjoyed it. I took a couple of photos inside the Bullring and a security man came and told me I wasn't allowed to use a camera in the mall. I apologised and put it away, but I had got my picture by then! We went to see the big bull. He's quite impressive isn't he? Then we went into Selfridges food hall where there is a second huge bull, made entirely from jelly beans! We both did some shopping, and got back home in time for me to listen to Ben play the piano for a while, before the three of us went out for a birthday meal.
On Tuesday Ben drove me over to Oswestry, where I stayed with Mike at the Punchbowl for a couple of nights. We drove through quite a blizzard on the way and it snowed steadily all evening. Ben was keeping an eye on it as he was driving back home around midnight, to grab a few hours sleep before an early shift the next day. Fortunately it warmed up a little so although the paths stayed white, the roads 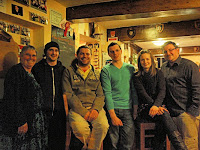 were wet and slushy and they didn't freeze over, so he got back safely. Jonathan is also living at the Punchbowl for now, and Tom and Jessie came over. Emma drove Michael (jnr) to see me so Mike cooked a lovely dinner for us, as well as Pippa and the two boys, and we all took over the restaurant which doesn't open to the public on a Tuesday. The little ones went to bed and the youngsters went home, and I sat in the bar with the boys for a good catch-up session. It was lovely to see them all.
Tom was off on Wednesday so he drove me into Oswestry to do some shopping, and then took me to Ellesmere to visit the craft shop where I used to go for workshops. Hazel made us very welcome and had the kettle on before we were hardly through the door. She had just got back from the trade fair at NEC where she had been talking to Yvonne and Robin who own the craft shop I use here in Spain. Small world isn't it?!
My bags were full to overflowing and I had to leave a parcel of bits and pieces for Tom to post to me, so now I have to wait patiently for my 'goodies' to arrive. Tom also drove me to the airport yesterday morning and I had a fairly uneventful flight home. We were a bit delayed because the French air traffic controllers were on strike again, and all the planes going over France were affected. But it wasn't too bad. Originally, after we had all boarded, we were told we would be sitting on the runway for an hour and a half, but in the end we got an earlier slot and were only half an hour late landing. It was lovely to see Chris again, and the animals all gave me an exuberant welcome, though today we were back to normal and I think they've forgotten I was gone. I am pleased to say that today was hot and sunny and I sat out in just a light skirt and short-sleeved shirt, to eat lunch. It has been very wet while I was away, and more light rain is forecast for tomorrow, but at least it is warm. The flowers are starting to open in the garden and it feels like winter is over for us. I hope so anyway.
I will put a couple of photos on here, but there will be lots more, including various family ones, in my gallery, so feel free to browse (www.picassaweb.com/kayempea1947)
Posted by mamapez5 at 9:19 PM No comments:

The gathering of the clan

Hello again. I really intended to write one more blog before my trip to England, but the time flew by and it didn't get done. I had a photo ready of Chris sitting on the back porch wearing his shorts, and bare-chested, just to show that summer is on the way. However, it was a short lived spell of sun and unfortunately when Jean arrived, she didn't have particularly good weather for her week. It was warmer than England, but we didn't see much sunshine. Still we had a nice quiet week, with time to do some craft together, visit my sewing group, and walk around the village. On the last day we spent all morning browsing Garrucha market, but when we emerged from the narrow streets lined with stalls, we found the sun had gone and the afternoon turned chilly. We had a good flight home together on Saturday and I spent last week at her house.
We had a lovely lunch at Dorothy's on Sunday and on Monday we had 'The gathering of the clan'. We all met up at Eve's house in Weymouth, where she had a lovely dinner ready for us. It is a year since I saw everyone and there were some changes. Some folk looked a bit less robust and others looked much better than they did last time. It was a shame that two of the men were missing - Chris at home in Spain looking after our animals, and Elmer in his nursing home - but their ears should have been burning as we talked about them both, so absent but not forgotten. I have a couple of very nice group photos which I will post on here and e-mail to you individually as soon as I get home and can use my own computer again. The following day we visited Elmer and I was pleased that he instantly knew who I was, and asked after Chris, and our life in Spain. I was able to show him Jonathan's photo in the magazine, as he has been a good Godfather to him and continues to remember him. On Thursday Jean and I did some shopping up at Castle point which was treat for me as such places don't exist in our area of Spain. I was able to get a few little things that I can't buy out there, but I had to be a bit careful as ryanair are not generous with their baggage allowance, and I was right on my limit coming out here. I did bring a few things to leave here, but it still won't give me space/weight allowance to take an aweful lot back.
I came up to Wolverhampton on Friday to spend the weekend with Jim and Jo. Ben had managed to get me a good deal on a first class train ticket, so I had a comfortable seat with free hot and cold drinks every half hour plus newspapers if I wanted one. I enjoyed the scenery. We pased a wood where every tree was festooned with balls of mistltoe, and another where, although the trees were bare, they had hidden their identitiy under a thick coat of ivy that covered right up their trunks to the tips of their branches, so they appeared to be lush and green and in full leaf. Everywhere looked very green but it was also waterlogged. There were a lot of ponies through the new forest and some kind of hawk landed on the fence and stared at me with his baleful, yellow eyes. Around Leamington Spa we found quite a lot of snow covering the ground, with some disconsolate sheep nibbling at the little tufts of grass that had managed to push through to the surface. It took me by surprise. We were comfortably warm on the train and I had forgotten just how cold it still was outside. I saw some children having fun with their sledges and then we came to an area of open farmland as far as you could see. It was all under snow and the rays of late afternoon sun broke through the clouds to reflect off it. It was so lovely! It was dark when we got to Wolverhampton, but the 'first class' stewards lifted my case and bag off for me and Jo was there with the children to meet me. So now I am having a lovely time with the family. Tom and Jessie are coming over this afternoon and we are are all going to see the church pantomime this evening. All the family are in it except Amias who isn't quite old enough yet. He has stayed home with me this afternoon while the others do the matinee. I'll go to the church service tomorrow morning. Jim thinks they may be a bit depleted as most of them are in the pantomime which has done four sell-out performances, so they are all a bit tired. Ben is picking me up tomorrow evening to take me to his house in Birmingham for a couple of days. I am looking forward to his birthday on Monday when I will give him his scrapbook I have been making on and off for the past three years! Then we will both go to Oswestry for my last few days. I'll need a rest when I get home!!
I can't add any photos this time, but I'll get a few ready for my next blog from Spain.
Posted by mamapez5 at 3:12 PM No comments: