Memories are made of this!

I am having a nostalgic week. While rummaging through my desk one day, I found this cloth bound book that I bought from a street vendor in Bangkok. I used it to write a fairly detailed dairy each day during our three months of roving in E. Asia during 2008. I started to read it and the memories came flooding back. We had such an amazing adventure, and did many things we had never dreamed of doing, so it was a very special time. I couldn't put it down until I had read right to the end. Poor Chris had to wait for his dinner until nearly tea-time, but fortunately he is used to my erratic meal times. On my computer I have a file of around four thousand photos that we took on that trip, and it really is my intention to make them into a series of scrapbooks, probably one each for Thailand and Vietnam, and perhaps one for Cambodia and Laos together. I shall put a typed transcript of the relevant part of my diary inside the cover of each one, and then I will have an illustrated account to keep the memories alive. I just need a lot of time to organise it all, but reading my diary has made me want to get stuck in to the project.

In the meantime I have added some more pages to my project 365 album, where I print a photo for every day of the year. We are passed the half-way mark now and I am still in there, so hopefully I will make it to the end. I have actually added an extra page for May as one photo a day was not enough to show all the happy times we packed into our one week in UK. It was so good to have all the boys together again, along with their families. We stayed with three of them, and we saw all our grand children and our dear little great-grandson. Then we drove to nearby Chester and delivered my first consignment of jumpers and hats for Africa, spent time with old friends, and even fitted in a few trips to the shops in Wolverhampton and Shrewsbury, and, of course our home town of Oswestry. So I have taken photos of each of those events and randomly arranged them on an extra page, as well as the one each day on the 'proper May page'. I will put a picture of each double page here, (Click on them for a larger image),  but if you are interested in the actual making of the pages, please pop across to my craft blog by clicking here, where I have gone into more detail. 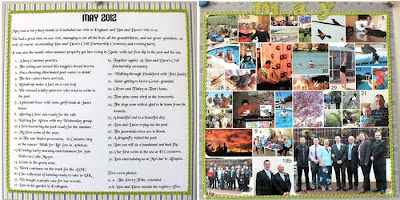 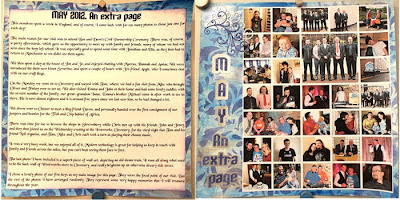 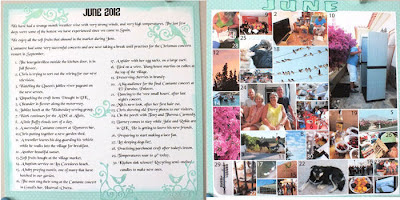 Our village fiesta has come to an end, so at least we can have the bedroom window open again tonight. I much prefer an open window and the fan on, to the aircon, but we were grateful for it the last few nights when the music was blasting out full volume until 7.00 each morning  and the windows had to stay firmy shut! We spent some time over on the plaza in the thick of it each evening except for Sunday, when we decided to have a night off. The 16th July is the actual patron saint's day of the village, so that is the last day of the celebrations. 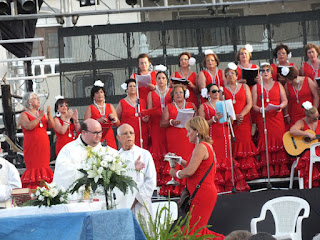 The final, main event is the open air mass at around 8.00 in the evening. The statue of Virgen del Carmen is carried to the plaza, the village choir provide the music, and the local priest takes the mass. I like to listen to his sermon to see how much I can understand. As part of the mass, all the villagers are invited to bring a floral offering and they all line up with anything from a single rose or a small posy, to a huge bouquet, and lay them around the statue and on a trestle set up along side her. 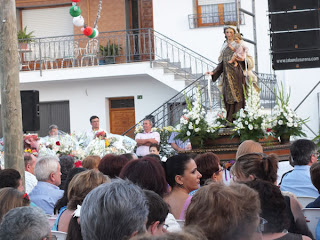 At the end of the mass they take them away again, but I think many of them are then taken to the church and laid around the statue again. I think the priest said that the flowers might be in memory of someone, or to give thanks for something, or just a gift to 'the mother of heaven'.
Many of the people who offer flowers, are dressed in traditional clothes, striped trousers, white shirt, red cumma-band and black hat for the men, and multi-coloured, many layered, frilled dresses for the women.The children are similarly dressed. Even baby girls in prams are lost in a mass of frills and lace.  I have made a new folder in my picasa gallery of the first night of the fiesta, which you can see by clicking here, but it may not be accessible for part of this evening as I am going to add a few photos from the other days after this. 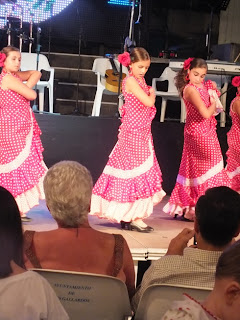 Each evening of the fiesta there is a half hour demonstration of some kind of dancing. I always go across to watch the little school girls doing their flamenco. My friend's grand-daughter is one of the dancers. One night it was 'batuka' which turned out to be a sort of modern dance done by the teenagers. This was on the Sunday night so I didn't see it. But last night the programme said it would be traditional style from Equador so I had to go over for that. There are quite a few Equadorian families in the village, and although they are friendly, they tend to stay in their own group, and of course they have their own traditions. 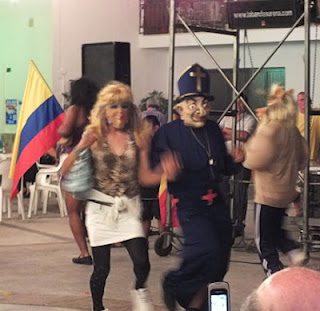 For their dancing I was expecting girls in black skirts with bands of bright colours on, white, embroidered 'gypsy' blouses and black hats. I couldn't have been more wrong! It turned out to be a dozen or so people, (they could have been a mixed group but we have a sneaky feeling that they were all men despite the buxom figures and 'tarty clothes' of some!), wearing rather grotesque masks that completely covered their heads, and a very odd mixture of clothing, just skipping up and down in lines a bit like a basic British country dance. They were ugly and in some cases quite scary for the children who were watching. During the second half, which was almost identical to the first half, they threw handfuls of sweets into the crowd and the children were torn between wanting to run and get some, but being afraid to get too close! It was quite bizarre, and I think most people were a bit non-plussed by it - the British certainly were. Standing behind them there were two of their children holding a Spanish flag and the flag of Equador, and one little tot dressed as a clown. I guess the South Americans are very into all things 'carnival' and their costumes reflected that. It was just so opposed to what we had been expecting, that it was a bit of a shock. The one part of the fiesta which was rather fun to watch was the cintas and cinteras. This took place every afternoon, starting with the tiny tots the first day, up to the adults at the end. The girls and women, again dressed in lots of frills, with high combs and flowers in their hair, meet up at the town hall and all walk down to the plaza accompanied by the village band. Here they take their places on rows of seat provided. There is an adjustable wire fixed across the road holding a set of rollers, (short lengths of pipe). Round these, officers from the town hall wrap strips of coloured ribbon with a metal loop at the end. 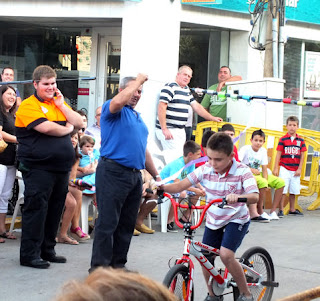 The boys/men ride down the road on their bikes, little trikes for the tots, to motor bikes for the men, and they carry a stick which they use to try to catch one of the ribbons so it unfurls behind them. I only went to the youngest group this year but I saw the older ones last year and I think they had someone riding pillion to do the hooking of the ribbon. There are plenty of helpers on hand to make sure the little ones are successful, and once a boy has got his ribbon, a little girl who has been assigned to him, comes out and ties the ribbon around him like a sash.

They then have their photo taken together, she gives him a present (provided by his mother at the town hall when she registered for him to take part), and he is supposed to give her a kiss! Needless to say not all the boys are up for this, and some of the tiny girls are not keen to hand over their gift either. i was talking to a Spanish friend while we were watching and she said 'This is all about the girls. It is very important for them'. It seemed to me the boys got the best bit - but maybe that was a lesson in life for Spanish girls!!