CALLING EVERYONE WHO LIKES FLOWERS. 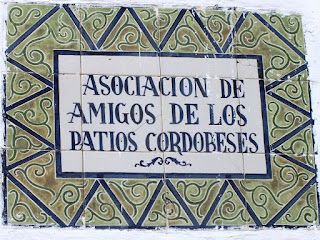 Córdoba. All of May is fiesta time in Córdoba, but for two weeks it is the fiesta of Los Patios. Certain folk throughout the city, belong to the "Association of the friends of the patios", and each year they decorate their courtyards/patios with flowers and open them to the public, and this was the main reason for our visit there last week.

Our first stop was at a tourist information booth where we picked up a map showing the six walking routes in the city, with the location of each public patio clearly marked. They were open from 11.00-2.00 and again in the evening from 6.00 until 10.00 during the week and midnight at the weekend. I managed to get to see most of them. Chris came to some with me and others I did on my own. Our senses have been assaulted by colours, scents, noise and heat! 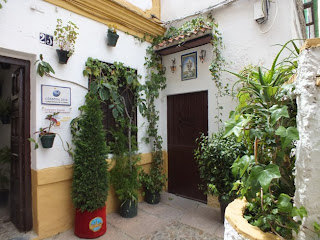 They were mostly easy to find, even when they were up a side alley, as each one had two slim fir trees in red pots, one placed on either side of the entrance. 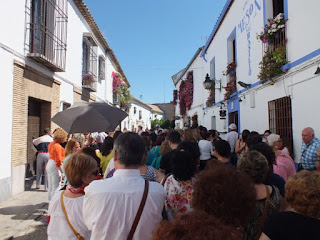 When I did the most popular route on Saturday morning (not good timing on my part!), I was surrounded by large coach parties all trying to see as many as possible in the time they had. Many patios are quite small so only 8-10 people were allowed in at a time, so inevitably there was some queuing, usually in the full sun, but the lines moved quite quickly and everyone was friendly and patient. 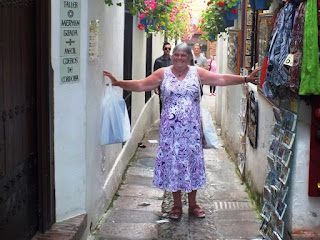 There were constant surprises, like when I walked down a side-street so narrow I could touch the walls on both sides, and came to an uninteresting row of plain terraced houses, and then stepped through an old wooden door in the wall to find myself in a beautiful courtyard, overflowing with flowers, and with little nooks and crannies hung with ferns to provide cool spots to sit. (For some unknown reason, google has decided to squeeze this photo. Sadly I am not that thin, but one can dream...!) 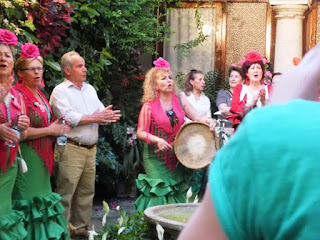 Some yards were quite big, some were built around a large tree that was probably there before the house was built. Some had a shady cloister around them while others had balconies all around. Almost all of them had a water feature ranging from the plain outside sink, sometimes complete with built-in scrubbing board from the days when the washing was done there, to original wells which now provide water for the plants but which would have once supplied all the water for the house, to elaborate fountains. The sound of trickling water added to the peace of each patio despite the crowds of folk milling around. One evening I entered one of the larger patios to find a group of singers, all in flamenco dresses, standing around a central fountain and singing with great gusto. One lady had great expertise at using castanets. 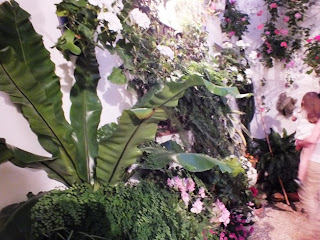 The flowers themselves were beautiful. Pelagoniums and petunias were the most commonly used along with kalanchoes, azaleas, verbena and a few roses. There were just a few I didn't recognise including a couple of quite exotic ones. There was an interesting use of foliage, coleus and tradescantia being the most widely used, and there were a surprising number of ferns, which shows how cool some of the patios are. In some cases there was an open window or door allowing glimpses of studios, passageways and old kitchens.
The patios were all judged and prizes were awarded under categories such as Use of colour, Use of architecture, Use of props, etc. These were highly valued, and several patios had a display of plaques won in previous years. 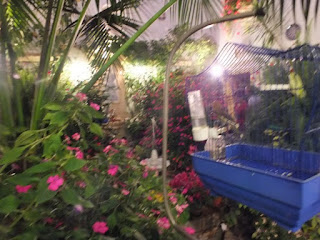 It is hard to describe what the patios were really like, and there were quite a variety of them. Many simply packed as many flowers in as they could, with pots attached to the wall right up to the roof. We couldn't help but wonder how they watered them all. Others were more sparsely planted, but featured more trees, often with little singing birds in cages, suspended from their branches. There was very little plant-able soil in the patios, and apart from the trees, 90% of the plants were in terracotta pots. 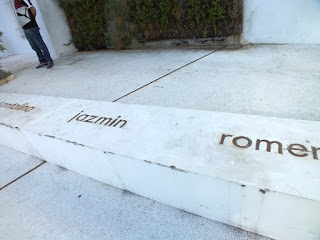 Probably the most strange patio of all was completely made out of white marble with just an occasional green plant to relieve the starkness. The only hint of flowers was their names stamped into marble blocks! 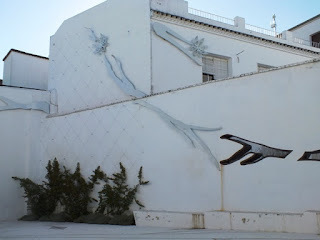 It was divided into three areas by heavy duty plastic 'walls' which had large shapes cut out of them. The cut outs were then 'decoupaged' on other walls. I didn't like it at all. It offered no comfort or welcoming feel, and I could see many visitors were puzzled by it, but I suppose it appealed to some artist who designed it, and maybe to others as well.
Needless to say, at least a third of my photos were taken in the patios, and it was hard to chose just a few to try to give you some idea of what it was like to be there. So again I have put together a slideshow not necessarily of the best, but just of a random selection. Some were taken in bright sunlight, and some on the evening sessions as the light faded. I have ended with  several close-ups of flowers that caught my eye. I hope you feel the 'wow' factor as you look at them. We certainly did.
You can view my slideshow by clicking this link. The background music is again my son Ben playing the piano. It is not a set piece, just a recording of him as he sat and improvised one day and I like it so I hope you do too.
Posted by mamapez5 at 9:56 PM