This picture makes me smile. Although Charlie is a lovely cat, he really doesn't like the dogs, and has not made friends with our other cats very much. He sometimes sits close with Tango, and just tolerates the rest, accepting that they live here too, but that doesn't mean he has to interact with them.


Just under the window in Chris' 'office' there is a spare table where he tends to dump folders, cables and anything else that is in the way on his desk, and Charlie likes to sit there in the mornings. But we were really surprised to go in there this week and find both him and Paco occupying a space on the table. They were both dozing, but later Charlie rolled over so he was facing Paco, and they still stayed there for a long time. There is hope for them yet! 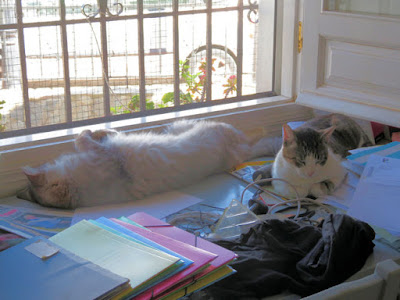 We had a lovely service at church on Sunday, but it was a bitter-sweet one as we said 'Good-bye' to a couple who, having sold their house here, decided to return to UK. They have been a part of our 'group' ever since we moved out here ten years ago, and for several years before that. William is a trained worship leader, and his gentle wisdom has held us all together through some rocky times, as well as the good ones. They are both sign language users,(not out of need, but to help at their church in UK before they moved out here), and sometimes Sylvia would stand at the front and sign through one of the hymns, which was lovely to see. They will both be sorely missed, but I am sure we will all stay in touch with them. The lovely Father Alan took the service and blessed them on their new journey. 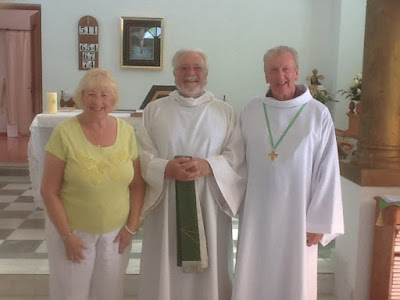 It was the first Sunday that we have put out the chairs and tables on the patio for our after-service cuppa, since around May, as it has been too hot. This week it was sunny and warm and several of us chose the outside rather than the more crowded room indoors. 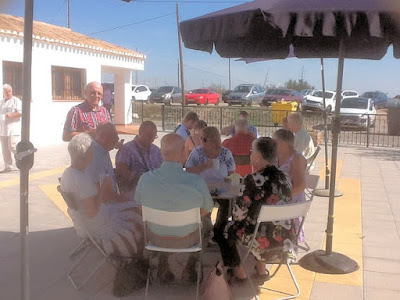 This week I have been working hard to finish the cardigan I am knitting before my holiday in UK in November. There is not too much more to do so I think I will manage to get it done in time. I have also covered a couple more hangers but they still need some flowers to decorate them. October is our family's busy month for birthdays, so I had some cards to make as well. But yesterday I had a moment of madness and decided to make some bread. I used to make it all the time, and although I do have a bread-maker machine, I still prefer what I make by hand. But full of good intentions I do buy the strong flour sometimes, and the little cubes of fresh yeast which are readily available in our supermarkets, and in my opinion are far better than dried yeast, but they rarely get used. I can't think of when I last made a loaf from scratch, but the ingredients were in the cupboard so I had a go. I must say I was pleased with the result. 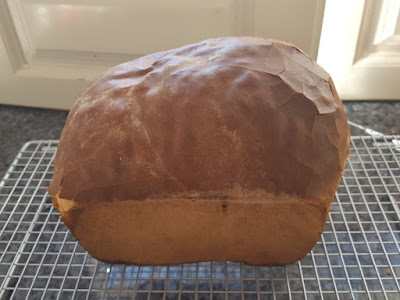 It's a bit lopsided, (quite a big bit if I am honest), so I didn't put an even layer of dough in the tin, but at least it rose, and had a good cracked crust on the top. Of course we had to eat some for tea, and when I cut it the texture was even with not too many holes, so I guess it was a successful try. The kitchen smelled wonderful while it was cooking. I must do it again soon. 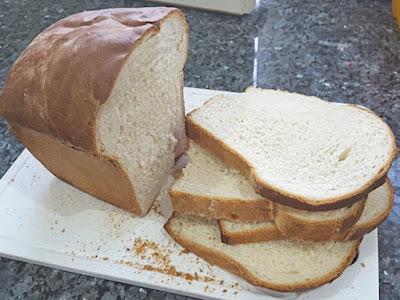 This morning I made an earlier start than usual as I wanted to go to Turre market to buy vegetables for a batch of piccalilli, and you have to be early to get a parking space. But it turned out that there was no market today because it is their patronal fiesta, so the streets were lined with fair-ground rides instead of market stalls! So I drove on to Lidls for my fruit and vegetable shopping, as their fresh produce is always good, and then on to the other shops I needed to visit. In Lidls I bought two kalenchoe plants, an apricot orange one and a yellow one. In UK they are a popular house plant, but out here they prefer to be in the garden, and they keep blooming for months. They are also resilient in all types of weather, so I wanted them to sit on our porch stand. They are full of buds so should give us some colour for a long time. 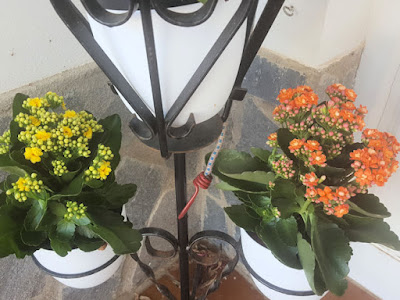 And that's about it for this week. It is very pleasant here now, with temperatures around the upper twenties, a gentle breeze most days, and cooler, more comfortable nights so we sleep better. The clouds still gather some days but it remains warm. I just caught the end of one pretty sky earlier in the week, so I'll close with that, link up with Rocking Your World, and Annie's Friday Smiles, and I'll see you again next week. 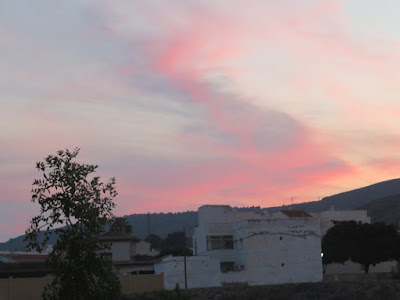