Well here we are again at the end of another rather uneventful week. Sadly the lovely weather has left us for now and we have had a fair bit of rain, though fortunately a lot of it was during the nights, and the temperature has dropped rather dramatically, leaving us with a very chilly house each morning. That's a good incentive to get some housework done, as moving around is warmer than sitting still! And we do have a lovely fire to make the main room a cosy place to settle down for the evenings.

After publishing my post last week I spent the day taking down all our decorations and getting them all packed away until next year. Tolly was asleep on the settee, and as I stripped the tree, I put each decoration on the seat around him until he was completely surrounded and he didn't pay any attention at all. Even when he woke up he only patted at one and decided it wasn't worth playing with, and wandered off. He was really good this year, and didn't damage any of the Christmas things. 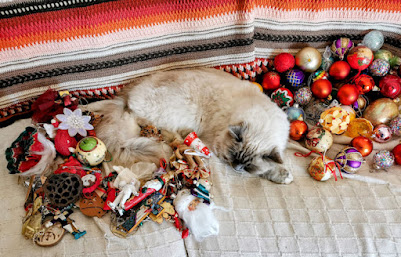 Last week I told you how the Three Kings walked the streets for Epiphany and this week the Town Hall published a big set of photos of them talking to various families on their route. I was amused to see there was one of Chris and I, with one of the king's attendants giving me our bags of sweets. 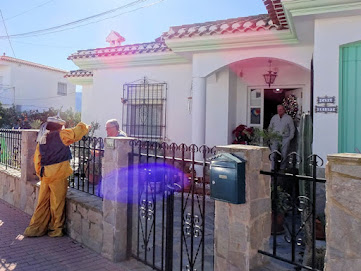 The Christmas street lights stayed on all weekend, but on Monday and Tuesday the men came round to take them all down, so we are all back to normal now.

On Monday afternoon we were sitting out on the porch and as usual we had several furry friends around us. I turned round to see Tolly asleep as usual, on Kim's big soft bed. He was stretched out and almost covered it's width. 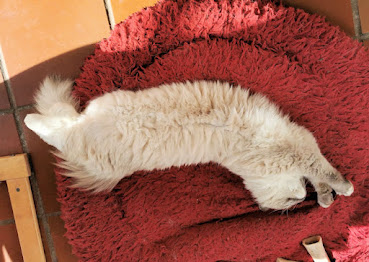 Kim was sitting next to it and wondering why his space had been invaded. Eventually he did venture to reclaim one corner so he had somewhere for a soft pillow, but he made no attempt to move Tolly off. Cats really do rule the roost! 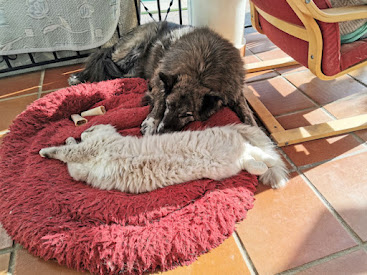 Tuesday was our last really sunny day, so, as rain was forcast for the rest of the week, I decided to go for a walk all round the perimeter of the village. It took me just under an hour and it was good to stretch my legs for a while. It was very quiet with few folk around. I don't think anyone is going out unless they need to yet. I stopped as I came to the front of the village to take this lovely photo of the Cabrera mountains. The sun was getting low so there is a pattern of deep shadows on them. 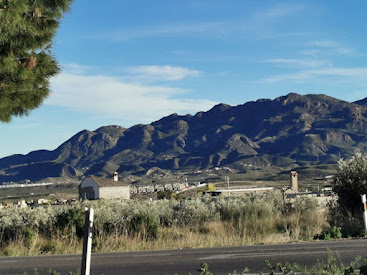 If you follow the range to the left, at the very end you can just see the little white village of Mojacar. There is a steep road winding up to it and you always feel you are quite high up when you are there, but really it is only on a big hill and is dwarfed by the higher mountains behind it. I zoomed in as far as I could to take this photo. 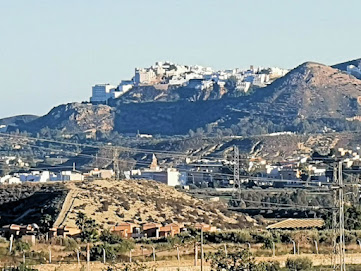 The three poinsettias I bought to go in my plant stand on the front porch, are still looking beautiful. Of course they are specially grown for house plants over the Christmas season, but I wonder whether you have ever seen one in it's natural state. I passed this one in someone's front garden when I was out on my walk. Isn't it amazing? The conditions must have been just right for it this year.  This is only a part of it and it was covered in 'flowers' all over. I lived in Cyprus for three years, many moons ago, and I had a poinsettia tree by my gate. It was way taller than me, but nothing like as full and splendid as this one. 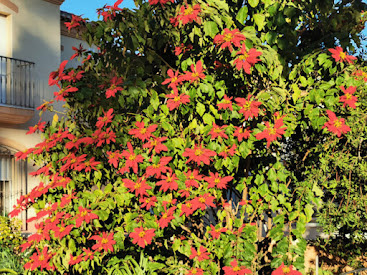 It was also nice to see the first blossom on the almond trees. This one is on the green zone behind our house. The trees there are old and straggely and are never tended, but they still manage to produce blossom and a few nuts each year. 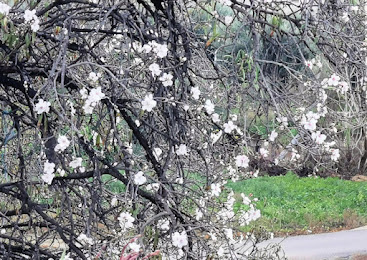 I spent a couple of hours last night chatting to my son Ben on the internet, and this afternoon another couple of hours flew by as I exchanged news with my sister. I am so very grateful for our good internet connection.

Despite the rain and clouds, or probably because of them, we have seen a few nice sunsets this week, so here are just a couple of them. 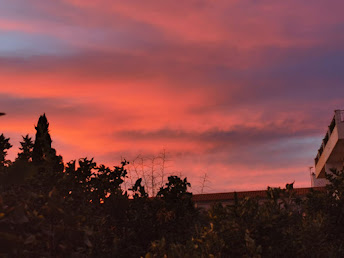 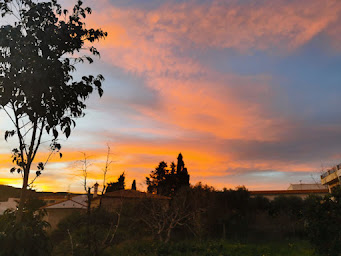 And one of the Cabreras reflecting the setting sun. 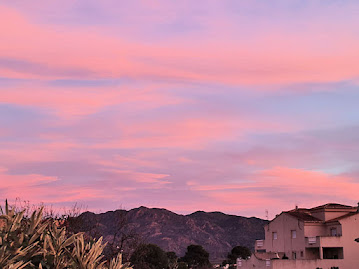 And finally something I spotted that made me smile, so I hope it will you too. 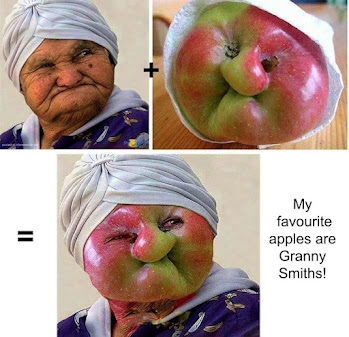 Time to link up with Annie's Friday Smiles now. Do join us if you have had something this week that has made you smile.