Now my Christmas cards have been sent off to Uk, I feel strangely 'unrushed', and have spent quite a bit of time just playing with some digital files and software, not because I want to use them at the minute, but I like to explore their possibilities.

However I have done some real crafting too. I wanted to try something different and I saw some paper sculpture online that I liked so thought I'd give it a go. This is called 'slice-form' sculpture and it is made by cutting lots of layers of paper and interlocking them with a series of slits. Of course they have to be perfectly designed to fit together, so I followed a link to a designer on Etsy who had several designs to choose from, and I picked a Nativity sphere. Because I had quite a bit of it in my stash, I decided to use vanilla light-weight card, and for once my Cameo machine was in a good mood, and cut all the layers first time of trying. You were encouraged to number the pieces as you cut them (there were 32 layers altogether), and once you purchased the file, you were given a link to a helpful assembly video. I have to say it was very fiddly to put together, and sometimes, as you locked a new piece in, one of the others popped out again! So it was taken apart a few times, and almost ended up in the bin, but perseverance paid off and I eventually made this. 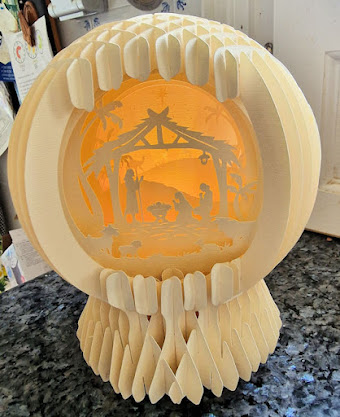 It is lit from underneath with a small LED light base that I bought from Amazon.

This view from the top shows how the layers are combined. 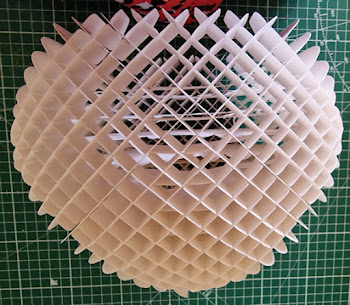 I was quite pleased with the result and wanted to have a second go, now I understood how it worked, so I showed the Etsy page to Chris and let him choose a design. He chose this one, which was just as tricky to make, but if I am honest, I think it worked better. Because it is a complete sphere, with no construction underneath as a base, the light shines through better. This time I used white card which I had to purchase on Amazon to get one I knew would cut well. 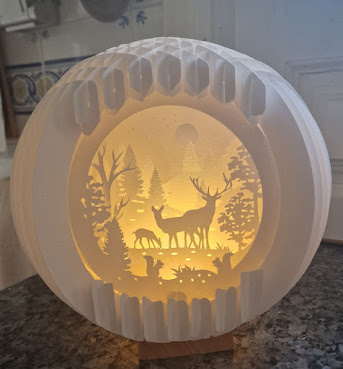 The lights I bought came as a pair, one with a warm white light and one that cycles through several colour. One advantage of these decorations is that they fold quite flt, making them easy to store for another year. 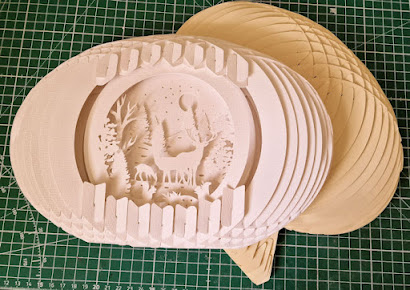 I have also been busy in the ktichen, because when I saw all the lovely fresh vegetables in the market, I decided to make a batch of Picalilli, so here is my work space. The cauliflower is the biggest element and that is done in the bowl, and the rest is ready to chop. I salted it and left it to stand overnight, and this morning I rinsed it well and mixed the spices and soon I had ten jars of pickle. I used to make double this quantity, but I am not sure whether I still have a market for it, and chopping double quntities of everything would have been hard on my knees and hands, so I thought this was plenty for now. 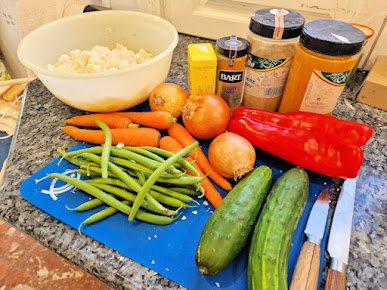 I also made a small batch of my hot chili, ginger and garlic jam. This only makes six jars but it is an aquired taste, and doesn't sell as well as the picalilli, but it is actually the one we like, and our jar had run out, so I wanted some more for us, and maybe a couple will sell. We will see! 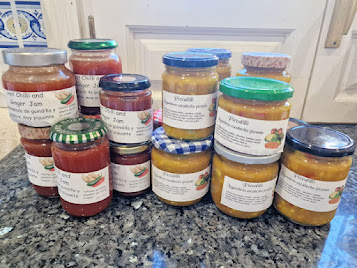 On Tuesday we had trmendous gale force winds, which blew over one of our large palm trees and smashed its pot, (annoying because it was expensive and newly purchased!), it tossed one of our metal garden chairs into the pool, at the deep end of course so it took both of us to fish it out, and sadly it snapped all three stems of my Echeveria succulent, so now I will  not know whether it would have opened any further, not this year any way!

Our car was successfully fitted with a new clutch on Monday so I feel safer driving it now. I am pleased about that.

I am on a TV break most evenings while Chris watches the football, which I have no interest in, so I am concentrating on my crochet and have made quite a few motifs for my blanket now. I like the way the coloured yarn is working up.

We have had some beautiful evening skies this week and I couldn't decide which photos to share, so I made a collage of some of them. 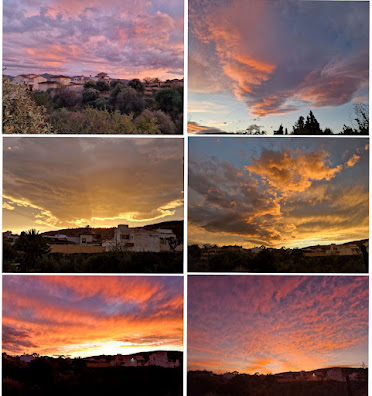 And that is about it for this week. So I am off to link up with Annie's Friday Smiles.