Here is my smile for this week. 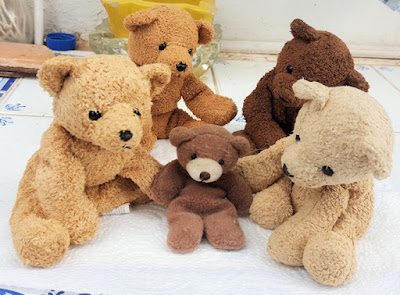 Just to prove what a softie I am at heart, these five little teddies have sat on a shelf just inside my kitchen for the whole ten years we have lived here.  And yes, I do talk to them sometimes! As part of my kitchen clearance ready for the workmen, they had to move and I found they were rather grubby and greasy. The label on them says "surface wash only", but that wasn't going to cut it, so they were all dunked in some hot soapy water and hung out by their little tails to dry. They weren't impressed but it did the trick, so here they are sitting in the sun to make sure they are dry right through, and now they are looking for a new home, probably in our bedroom.
I have been working hard all week to get the kitchen finished because, on Monday, I am flying to UK for my dear brother-in-law's funeral on Tuesday. It wasn't easy finding flights, but Chris has agreed to drive me to Alicante airport, about forty minutes further on from Murcia, because the return fare to there was less than a third of the price for Murcia! I have no idea why, but I am so happy that I am able to be there. I will be staying with my sister Jean until Friday, and flying back that night, so I won't be posting next week. But I will be home in time to sing at my choir concerts on Saturday and Sunday, so I am happy about that too.

Last Sunday we had another nice meal out with friends following the church service. We all went to a popular Chinese restaurant, (yes we have Chinese and Indian restaurants here in Spain too!), to celebrate a friend's birthday. I did take some photos - or at least I thought I did - but I cannot find them on either my camera or my phone, so I didn't do something right!

When I go out at the back to feed the dogs morning and evening, I always take a few minutes to lean on the railings and take in the peace and quiet, and draw breath before I get back to work. This week I noticed the pomegranate trees in the green zone are in bloom. They stand out because the flowers are a rich, deep, orange, in contrast to the dark green of the leaves. 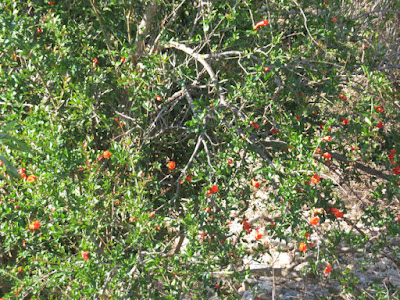 They are quite small but you couldn't call them insignificant. You can instantly see how the fruit forms at the base of the flower, leaving the petals to form the hard, open crown at the top of the ripe fruit. 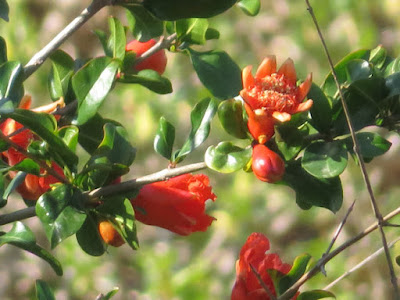 It was good to hear that my friends and family in UK actually had good weather for their bank holiday this week. We had already had ours, as El Día de Trabaja, or Labour Day, is celebrated here on 1st May, regardless what day of the week that falls on, whereas in UK, it is the first Monday in May. I always think it is sad when folk have worked hard through a long hard winter, and finally have a long weekend off and it rains. But this year most people saw some sunshine. 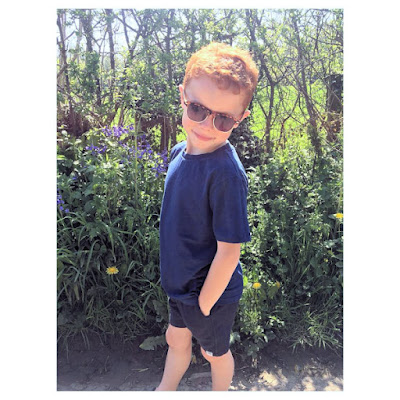 Here is my little great-grandson, being a 'cool dude'. He is lucky that despite being a red-head, he is not over-sensitive to the sun, and goes a lovely healthy brown rather than red. And he just loves to play outside whatever the weather.

Walking the dogs each morning this week, we have been watching the flowers open on the jacaranda trees. There is a whole row of them lining the slip road at the front of the village. 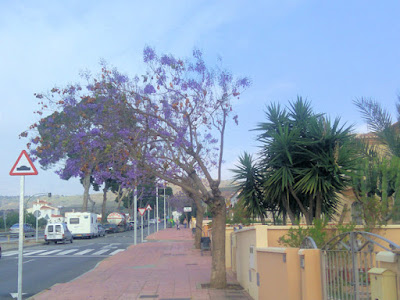 They are such a pretty colour, and the flowers always come before the leaves so they are not obscured at all. The big brown 'pennies' are last years seed pods. We stopped this morning to take a photo looking through the tree to the lovely blue sky above. 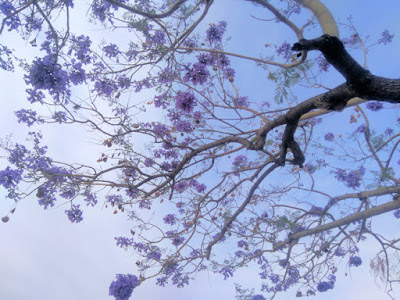 We have had some lovely days this week, but also several days of rain, mostly in the evening which isn't too bad. On several occasions we have heard the thunder rolling around us and seen the lightning in the distance. As the rain stopped I sat outside one evening and was treated to an aerial show of swallows and house martins, in a frenzy of feeding on the bugs that were disturbed by the storm and rose up from the green zone. They dart and dive and move so very fast, but somehow they never collide. They flew passed me so close I could almost have touched them. It was hard to get photographs of them because they moved so fast, but here are a couple of stills that I took from a short video I made. 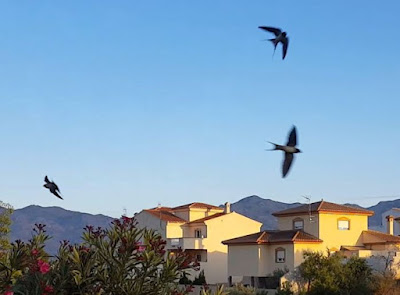 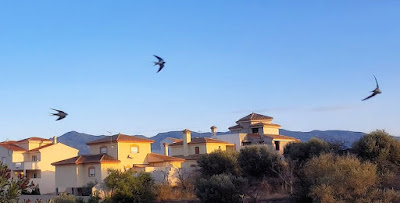 As I have been busy in the kitchen all day, I have spent some evenings in my craft room making a few birthday cards that I needed. I even made a set of eight Christmas cards ready for a challenge on 25th of the month, as I know I may be too busy to make them later. But I have still found some time to do my crochet. Here is 'grumpy cat' Tango, trying to be helpful, but as you can see, he is not impressed that I keep moving him to turn my work around. 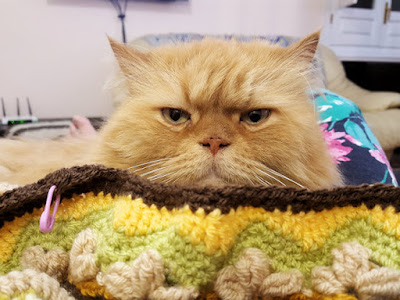 And so to one last photo. I was looking back on my blog and I noticed that I often have lovely sky photos to share at this time of year, but this year they have been few and far between. So when I saw a pink glow last night I went out to see. It wasn't very impressive, but very pretty and calming too, so for what it is worth, here it is. 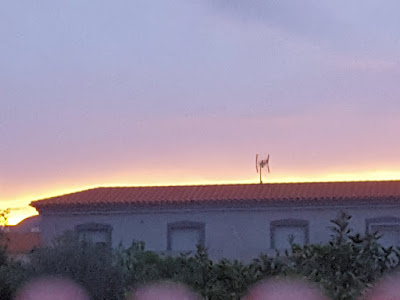 Now I will link up with Annie's Friday Smiles, and Rocking Your World, and I will be back in two weeks time.
Posted by mamapez5 at 4:23 PM