As I left you last week I was just on my way to Albox for the final choir event of this season. We opened the Albox music festival, with almost an hour of singing in a beautiful old church in the centre of the city. It is the one event when we have a good number of Spanish families in the audience as well as the British and other Europeans. They really seemed to enjoy our music, the majority of which were sung in English, though we did three numbers in Spanish this time. It just goes to show that music is its own language, and can be enjoyed by everyone.
After the meal, we were taken to the 'third age' club room and given a lovely meal. Jugs of beer and wine, and lots of tasty dishes were brought out to share, and there was more than enough for everyone, with plenty of time to chat to friends as well. It was a great way to end a lovely evening. 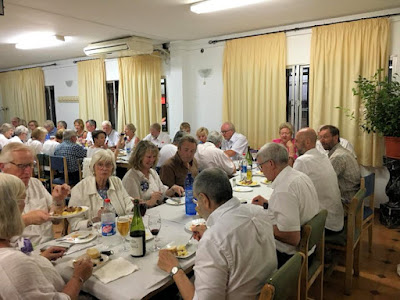 It is really hotting up here now and we have had some very warm sunny days, but warm cloudy ones too, and very high winds in the evenings. One night there were huge storms all around us, with local flooding, but they all seemed to just miss us which was a blessing. One evening we actually managed to have a bit of a decent sunset. They have been few and far between, so I made sure to capture it. 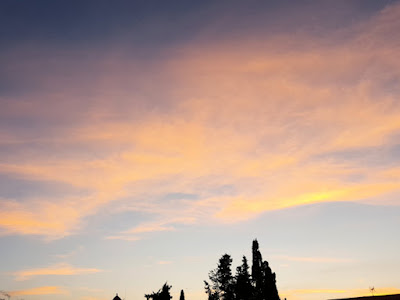 On Tuesday afternoon we had an e-mail to tell us the man was coming to fit the granite worktops in the kitchen, at 8.00 the next morning, so we had to get up a bit earlier than usual. I went out to open the flap door for the dogs, and that day there was 'almost' a sunrise! 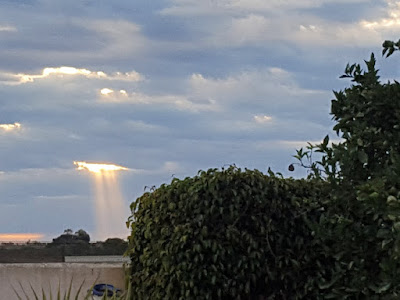 Fortunately those clouds soon melted away to give us another lovely day.
The men arrived as promised. Their workmate who came to measure up the week before, had done a good job, and the tops were soon fitted. Then the 'kick-boards' were put in place (in the same granite), and the hob and sink were placed in their relevant holes. In the afternoon our two workmen were back to connect them up so we are almost done now. We are still waiting for a piece to fit the tall narrow cupboard, and the new fridge/freezer is coming on Monday afternoon. Then it will just be a bit of filling and sealing, and the ceiling needs a top coat of paint, but with some of my equipment in place it is beginning to feel like my kitchen again now. 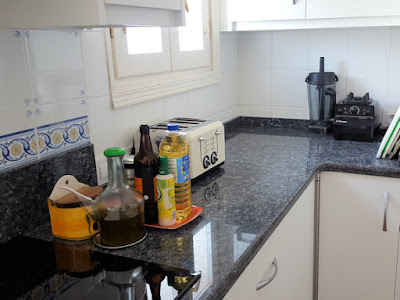 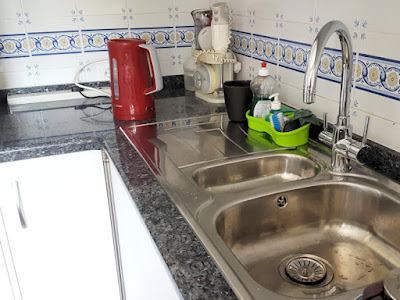 Normally the cats spend the night in the kitchen and utility space, with a cat flap so they can get out if they want to. As it gets warmer they tend to sleep for much of the day, so they like to go out and hunt, and play at night, and now they are all fairly traffic savvy, we let them. But while the kitchen has been in turmoil, and the hall has been full of boxes of furniture etc, we have left the door to the sitting room open, so they can sleep in there if they want to. Luna has her favourite place to be, and she has been asleep there most mornings. She has made her own little nest there and looks so comfortable. 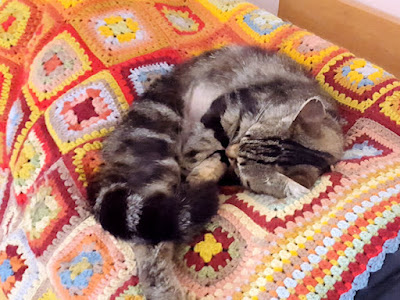 I was told I could now start filling the drawers and cupboards in the kitchen, so I have been bringing items back out, one crate at a time. One evening I left an empty crate on the top, and Tango soon made it his. (If I fits, I sits!). Chris found him there in the morning. 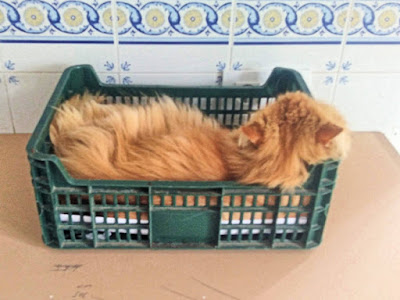 He doesn't look as comfy as Luna, but he wasn't impressed to be disturbed. 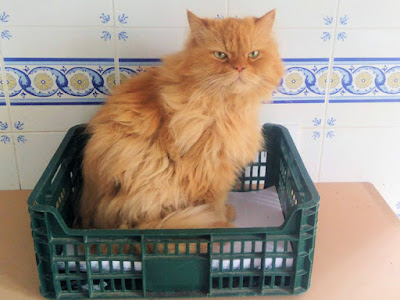 We have a new fur-baby to add to our family this week. His name is Charlie, and he is a beautiful Norwegian Forest cat. 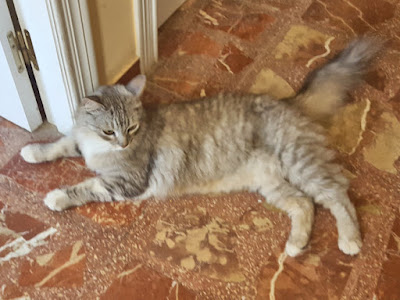 He is a big boy with an absolutely beautiful tail, which this picture doesn't do justice to. He belongs to a dear friend who is moving back to the UK because her husband is very ill, and he wants to see her settled near her daughter. She felt that Charlie was too old to cope well with the journey and the change in climate, plus she will be living with her daughter (and her feisty dog), for the first few months until her 'granny flat' is ready. So I said I would be his retirement home, and yesterday we drove over to collect him.
He is a bit unsettled yet, and looks for places to hide in. He is not keen on the dogs, but is getting on well with our cat Paco, so we are hoping he will soon settle in. I am not sure if I will be keeping him yet, as my friends husband took a turn for the worse last night and is in hospital, so we are waiting to see whether he will be well enough for the long journey to UK on Sunday. If she ends up staying here for a while longer, I think she will want him with her, so we will have to wait and see. But he did sit on my lap last night, he has had food and drink, and seems quite content, so I will be happy to be his new family. 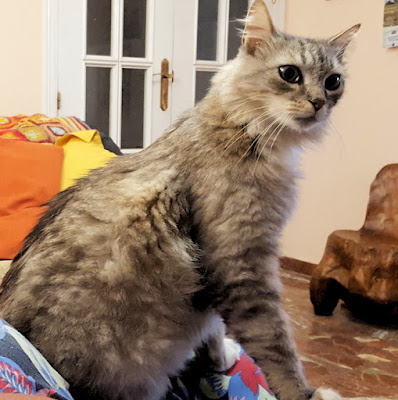 And my goodness; It is now time for me to get ready for choir practice. We will continue to meet each week for now, to really get to grips with the songs for the Royal Albert Hall concert in November.
But there is just time to link up with Annie's Friday Smiles and Rocking Your World before I go out.