Well another week has flown past, and though I have been too busy to take many photos I have some to share.


Happy Moments often involve happy memories too, and yesterday my memory on Facebook was this photo of my curly-haired grandson Finlay, taken nine years ago. I loved it then as he is the image of his daddy at that age. 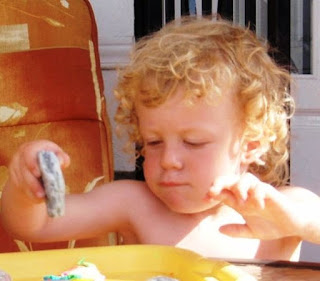 He was here on holiday with his parents and brother, and it just so happens that he is here again this week, though nine years on he looks somewhat different! 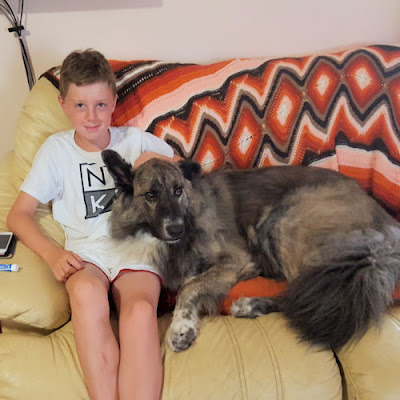 His hair is still curly but he keeps it too short to really see them, and next month he will be starting at the secondary school. As you can see, Kim has found another new friend.
In fact he is spoiled for choice this week, as we have our son with his two boys - aged 14 and almost 12, and his partner with her two boys aged almost 6 and 9, so we have a full house, and Kim spends his time going from one to the other, wherever he thinks he may get some special attention. All four boys love all the animals, and are happy to fuss any of them.

The family arrived last Sunday, which happened to be the end of theatre week in our village and this is always marked by some sort of street drama. It ranges from the sublime to the ridiculous and this year's show definitely fell into the latter category. I guess it was slapstick, a sort of circus clown act, but the 'cast' were dressed in a range of vaguely Scottish costumes. They had several noisy instruments and did some rather bizarre dancing/marching around the plaza. Bear in mind that, like most Spanish events, it didn't kick off until 10.00 at night, but like a film of the Pied Piper, young children slowly appeared from every direction, with a fair number of adults behind them, and they all sat on the ground around a makeshift stage to enjoy the performance. It was a strange series of 'mixed metaphors' with bagpipes, some highland dancing and a mock up of tossing the caber and other events from the Highland games, though I doubt whether young Spanish children have much knowledge of Scotland and its traditions! But they loved it all, from the noisy lady shouting instructions, to the odd costumes, the 'castle' that became a train and was driven around the plaza, and the 'pretend' bus with twirly umbrellas for wheels. 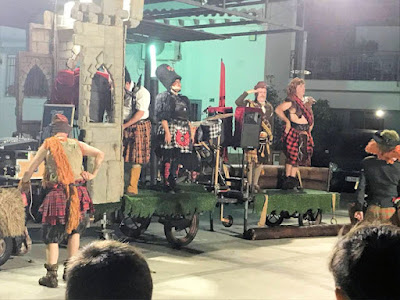 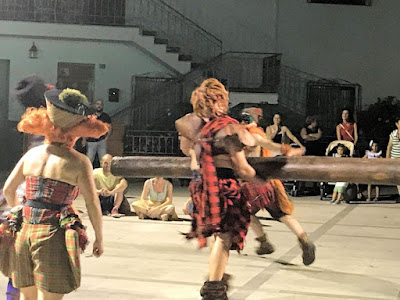 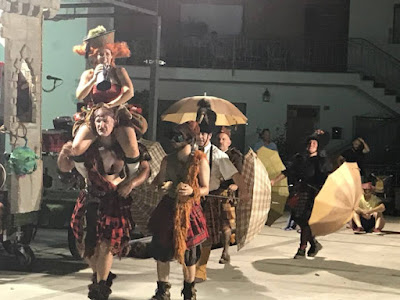 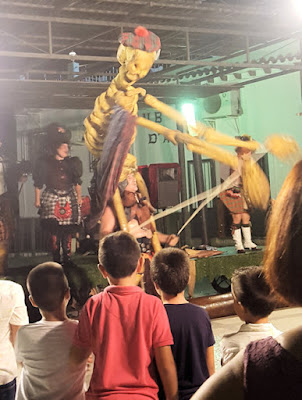 I didn't understand all the Spanish but I heard them say something about a storm when there was a loud clap of thunder, and the lady with the microphone was shouting about a Phantom. Then this weird creature appeared from behind us and caused a stir among the children.                    For the final dance sequence, the umbrellas came out again and this time they were filled with glitter that scattered everywhere as the umbrellas were opened and twirled. It was very effective against the dark sky and bright stage lights. The children loved it and were soon busy trying to collect it up to throw again. 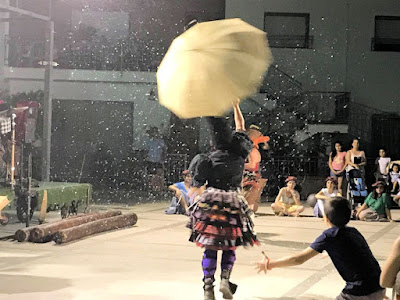 By midnight we were wandering back to home, and I think our visitors knew they had arrived in Spain. You don't see anything quite like that in UK.

Most of the week, the family have been visiting one of the beaches. Mike loves the sea and I think he has managed to get in it every day. One day they drove over to Roquettas to the big water park there, but we stayed at home. It was a bit too far for us on such a hot day. We all went up to the village pool one afternoon and had a good swim up there, and we have spent the evenings playing cards and relaxing at home. I have taught the older ones how to play gin rummy and we have enjoyed getting to grips with that. 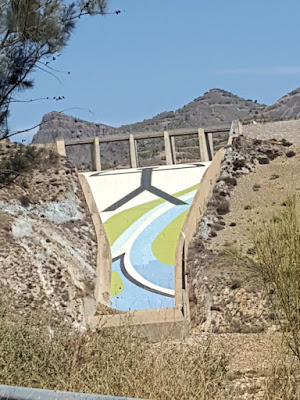 This morning Mike took his two boys off to a water fun park on their own. There was a minimum age of seven, so Lucy's boys are not old enough for it yet, so she took hers down to the beach. I went with Mike because the park is a new venture this year, so I wanted to see it so I know whether or not to recommend it to other visitors. It was set in a large man made canal or reservoir that was constructed back in 2008 for the Mediterranean Games. The dam at the top is painted to depict an Indalo man and the flag of the games.(You can just see the head of him as he disappears over the top).
The park itself is a series of inflatables linked by floating walkways, and each participant can book a one hour session. By the state of the boys and their dad at the end, an hour was more than enough. 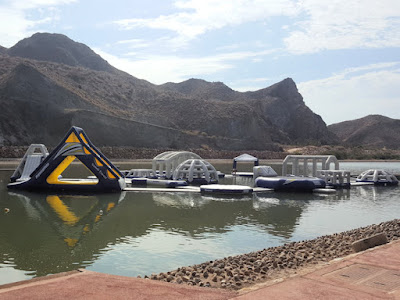 At the water's edge, there were groups of old-fashioned style deck-chairs under sun shades and I was happy to sit on one of them to take care of the bags etc, and I was armed with two phones and instructed to take some photos. In the bright sun shine it was hard to see which was my little group, so the photos are not that good, but they had so much fun climbing, jumping and swimming. It's no wonder they were tired out at the end of it. Here are just a few of my photos. I am hoping there are some better ones on Mike's phone.
From the big splash at the bottom, I am guessing Mike has just come down the slide in this one! 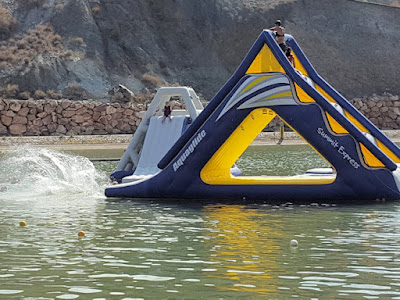 Here are a few more that I think I can identify our boys in. 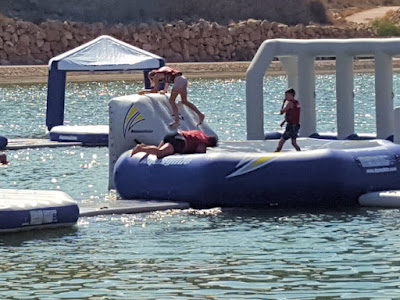 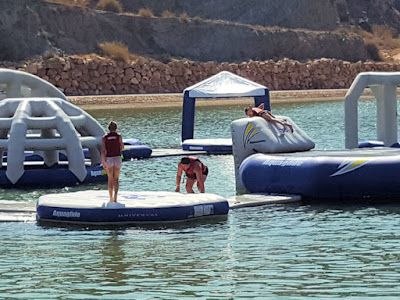 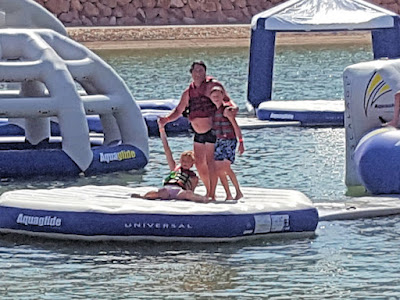 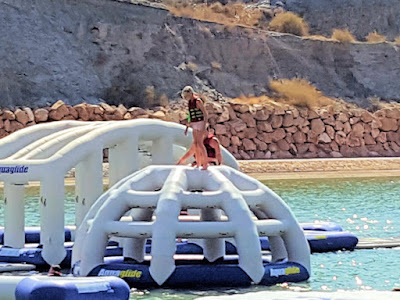 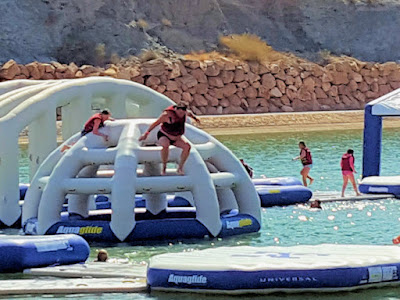 Afterwards, as we were walking back to the car, I spotted this monkey face in the cliff, and just had to take a photo of him too! 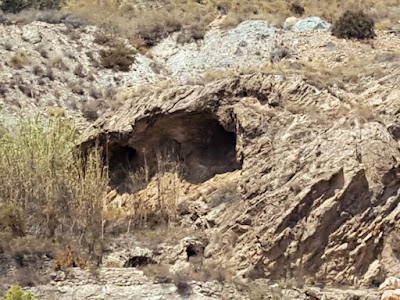 And that's about it for this week. We are all off down to Mojacar for a meal together now, so I'll quickly link up with Annie's Friday Smiles and Rocking Your World, and I'll be back later to visit you all.