Of Birds and Bugs

We've had an unsettled weather since our visitors left last Tuesday, with rain, clouds, very strong winds and some sun, which, when it shines, is now getting quite hot! I've been feeling a bit under the weather with a very nasty eye infection. I used to have them a lot as a teenager but I haven't had one like this for years. It was very swollen and bruised looking. I remember they always used to make me feel quite poorly, and I had a cookery teacher at the grammar school who I disliked intensely (probably because she called everyone 'Child'), who wouldn't let me in her kitchen when I had a bad eye. She used to look down her nose at me and say "Child, you have a vitamin B deficiency"! Well, I don't think I lack any vitamins now. It is more likely that I got dust or sand in my eye in the high winds, and rubbed it! Anyway, Chris nagged me to do something about it so I went to the Farmacia yesterday and she gave me hydrocortizone cream. That took me aback, as when I wanted some for the patch of dry skin that Ben got on his chin every winter, my friend, who is a pharmacist, said "Don't tell them it's for a face or they won't give it to you". Anyway, this stuff is meant for eyes. It's in a vaseline base, so it's very greasy, but it has made my eye more comfortable, and hopefully it will be gone in a few days. 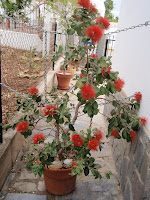 It rained steadily yesterday evening so this morning I went out to inspect my plants. They were of course, very grateful for the drink and were all looking very perky. We have a big, fat, red rose bud just bursting open. That's one of the plants that Chris pruned nearly down to the ground in February, so it has grown really fast. Last week I put up some photos of some of our flowers and one showed a shrub with red hairy flowers that I thought was quite interesting. I'm posting another picture of it now because suddenly all it's buds have opened and its covered in flowers. I still don't know what it is but I rather like it.
Today I have been working in my room all afternoon. It faces out the back of the house, overlooking the 'green zone' beyond our fence. I suddenly noticed that there were loads of birds swooping around and thought the rain must have woken up the midges. I assumed the birds were house martins. They are very common around here and several pairs have nests under the e 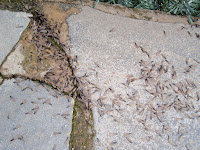 aves of next door. We can hear their babies squawking for food in the mornings. I went outside to investigate and soon found the reason for all the excitement. A nest of ants had erupted on our path and were having their moment of flight, and a lot of them were ending up in little house martins tummies. I stood there for ages trying to catch the birds on camera b 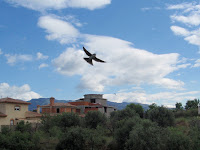 ut, of course, they were much too fast for me, and they were swooping in every direction so I couldn't time it right. But in the end I did get one (and there's another one in the far distance), but when I put the picture on the computer I found that it definitely wasn't a house martin after all. There is no 'swallow' tail there! I don't know what it was, and I am sure the martins were also swooping around, but they were too camera shy for me to prove it! Anyway the ants were soon dispersed and the birds disappeared, but it was fun to watch while it lasted.
Posted by mamapez5 at 9:17 PM