Wow. We´re at week 24 already. How time does fly. It seems a bit odd this year as we should now be going into the hottest part of the year, but we are still getting thunderstorms and some rain, which can bring the temperature down a good few degrees. But between the storms it is more like summer, and we have had a bit of both this week.


We will start our smiles this week with these three happy faces. 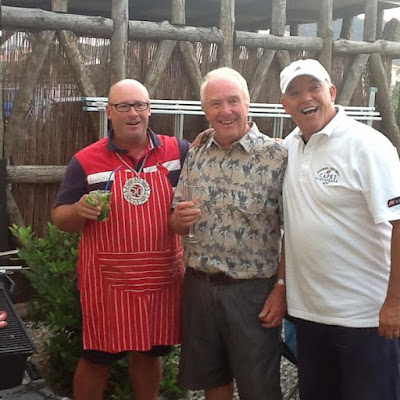 The two on the outside are best friends, Richard (on the left) and Gustavo. Richard had his fiftieth birthday a few weeks ago, but as they were away on holiday we did not have the chance to celebrate with him. This Saturday it was also Gus´s birthday, so Richard and his wife decided to hold a joint party with a barbecue. We do expect it to be safe weatherwise when we arrange a June party, but Saturday evening was very overcast, with a feel of rain in the air. Not deterred we all turned up, prepared for an evening outside. There were tables, and groups of seating ready when we arrived, and Gus´s daughter Paolita, was at a table in a corner mixing mojitos. 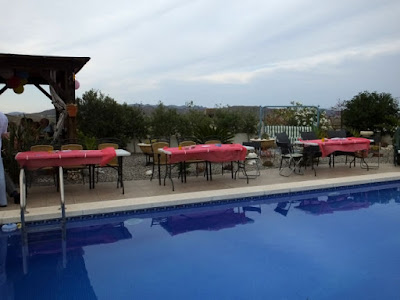 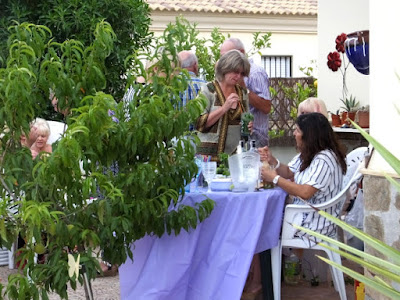 It would have been rude not to try one wouldn´t it? I love mojitos and these were very good. I only had one, early in the evening, and after that I was on ginger ale as I was the one driving home along the motorway. Fortunately I am not a drinker and I can enjoy myself without alcohol, so it is no hardship for me to be the designated driver when we go anywhere.
Soon there was quite a crowd there, and we all drifted to one of the groups, sitting around the pool. 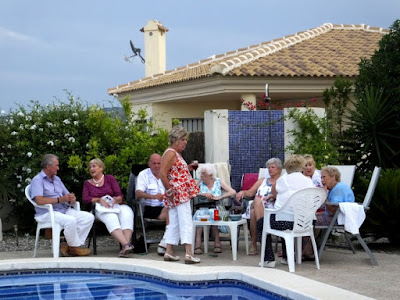 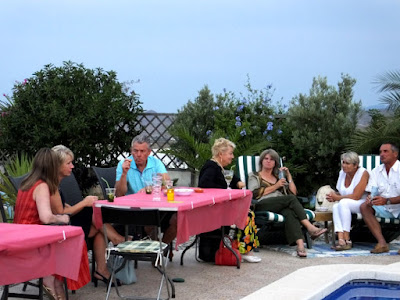 The sensible ones made themselves comfortable under the pergola where the bar was! 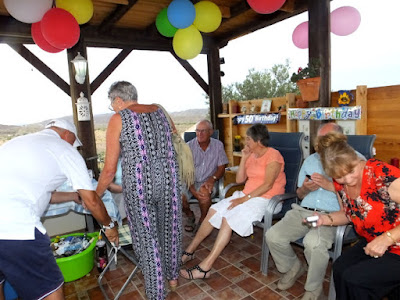 Gus went around having his photo taken with groups of friends, but I took this one of him with his wife. They are both from Columbia, so are fluent in Spanish, and they are great fun to be around. 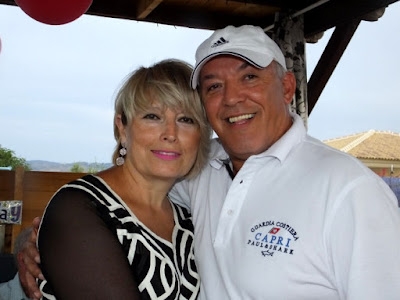 Meanwhile Richard was busy manning the barbecue, and he soon had a good heap of sausages and burgers ready to eat. 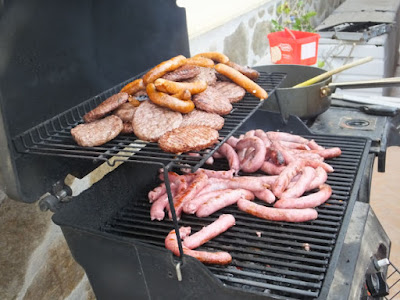 There were also huge trays of oven cooked chicken, and every surface in the kitchen was covered with salads, bread, and anything else we could possible need.
Late in the evening we went indoors to cut the birthday cakes. There were two very different cakes. Richard´s was made by one of our English friends. The sugar-craft walking boots and poppies were most impressive. 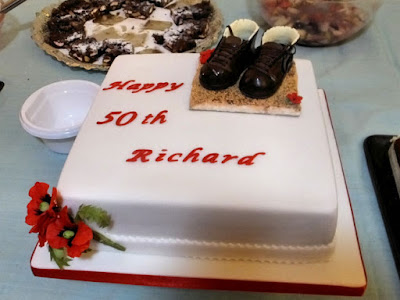 For Gus, there was a Spanish style cake made by his wife - equally tasty, and it carried some pretty amazing candles! 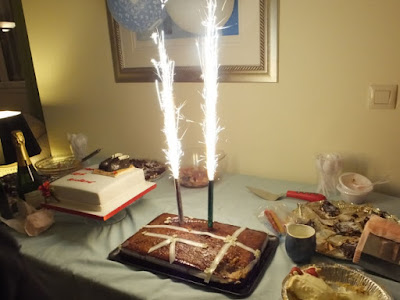 Around midnight several of us jumped into the pool. It looked just too inviting to miss the opportunity. Those on the side thought we were mad, but it was lovely and warm, and so refreshing.
The rain held off all evening, and we sat around until the early hours of the morning, just chatting and enjoying the company. I think we got home around 3.00!

I guess that is the highlight of my week, but other good things were the arrival of a parcel from America that I have been waiting for. Now I just need some time to play with the contents.
I managed to make a few more cards so I have nearly all the ones I will  need over June and July, when I will be in UK for some of time, and will not be crafting.
I am grateful to have found a dentist who is willing to do the work on our teeth that we both need, so hopefully we will soon both enjoy our food more.
I am so grateful to the friends who have taken away another five blankets worth of squares to stitch together for me. I am getting near the bottom of the crate now. It will be good to have it empty for the summer. I am crocheting round pieces of work that I have been given which are a bit too small. So I am just bringing them up to the required size, but it is getting too hot to have a blanket on my  lap all evening, especially when our big fellow Kim thinks it there for him to lay on!
I had another gift of fruit this week from a different friend. One of my sewing group gave me a big water melon. Her neighbour had given her four, but no-one can get through that many of them before they go off. Not too many folk were interested in having one, but I like them because they make a good base for my fruit blends and smoothies.
This morning I went down to Turre market and there was a man there who drives to UK regularly in a van, and comes back with whatever he is able to buy. It is from him that I can buy good Bramley cooking apples which they don´t have out here. Another thing we cannot usually get is the soft berry fruits. I guess they have a too short shelf life. This year, for the first time, Lidls have had a few raspberries and blue berries, grown in the province, in the area of Huelva, where the strawberries come from. But they are not all that good flavour wise, and they are very expensive. So today I was delighted to see the market man had little punnets of raspberries, blackberries, and blue berries, and they were a good price too. So I treated us to a tray of each, but we will have to eat them quick, as they won´t last in the heat.
Also in the market I bought a little tree for our front patch of garden. I have wanted one of these for a long time. It goes by the grand name of Caesalpinia gillesii, but seeing as I can´t even say that, I will stick with the name the local folk use - Arbol de ave de paraiso - or Bird of paradise tree. It is not a strelizia so it is not related to bird of paradise flowers. I thought it was an acacia like the mimosa, but apparently it is from the fabeles or bean family, and will have bean-type pods of seeds on it. 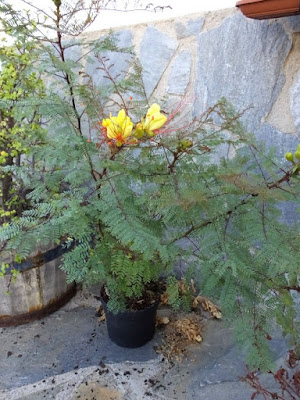 The leaves are delicate and fern-like, and at night they fold up, opening again with the morning sun. The flowers come in clusters, and are yellow with amazing long red stamens. 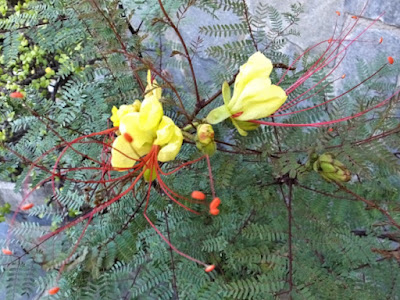 These are a bit sad looking because it is only a baby tree, and it suffered rather on the car ride home. But there are several more clusters of buds on it, so hopefully we will have some better flowers soon. Now I will I have to choose a home for it.
I will finish with one sunset photo. Richard and Margie´s house is quite high up on open campo land so I had hoped to get a good sunset photo, but sadly the threatening rain clouds obscured most of it. I did take this one at the last minute, and at least it is a different skyline from the usual one at the back of our house. 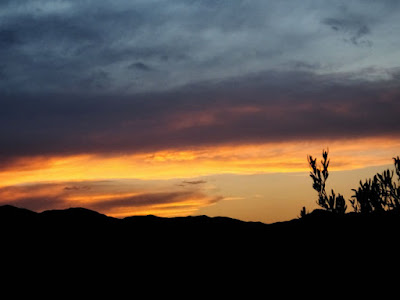 So all that is left is for me to link up with Annie´s Friday Smiles, and Virginia´s  Rocking your World post at Celtic House. Have a good week everyone.