Well it is now two minutes past midnight in Spain, so I didn´t quite make it for Friday this week, but I shall get this posted before I go to bed.
I have three smiles to start us off with 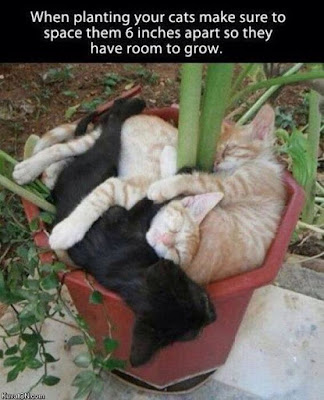 this week, and the first is a picture I saw on facebook this week that really tickled me. Perhaps it is because I have four cats of my own, but anyway I hope it makes you smile too.


The second one is also a photo I ´borrowed´from facebook, but as it belongs to one of my sons, that doesn´t matter. 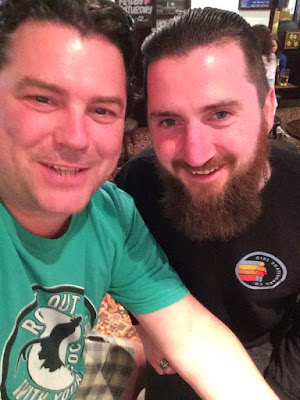 This is my second oldest son with my second youngest son, and they drove right up to Scotland together this week to attend a gig of a group they both like. It always warms my heart to see any of the boys enjoying the company of one or more of their brothers. We did worry that they wouldn´t stay in touch so well once we moved away, but if anything they have grown closer. Certainly Mike and Jonathan look happy to be together.

My third smile is this photo of our Miki who had her summer haircut this week.She has had a lot of comments on facebook, but several folk thought she was a boy. It was our Annie who pointed out it might have something to do with the way she is sitting and the position of her right back leg!! 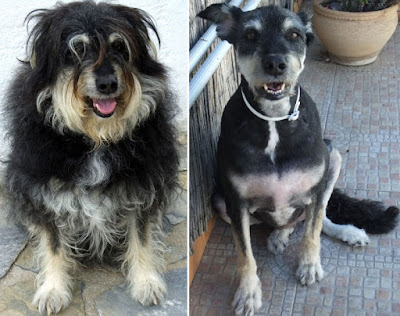 Lots of my friends think she looks better after her haircut. Personally I love her when it is long and shaggy, but she must be a lot more comfortable without it. We only have it cut once a year, so she will have a warm coat again by the time winter sets in.

I actually have a fourth happy photo now, albeit a very bad one. 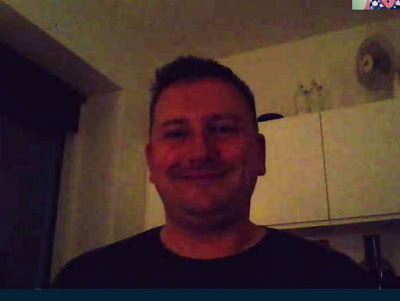 This is son number three, so he comes between the two above, and the reason that I am so late with my blog tonight, is that I have just spent at least two hours chatting with him on Skype. While we were talking I did this screen capture, but he has such low lighting in his flat, that the photo is very dark. But I am so grateful for Skype that allows me to keep in touch with all the family.

I haven´t got a lot else to report on this week. I did go to coffee morning up at our friends house on Tuesday. Out here everything grinds to a halt for July and August, so this week we have our last house group, our last choir practice etc, and already things are slowing down. So we have decided that, as we live so far apart, and not likely to just bump into one another when we are out, we will hold a few social gatherings over the summer, just to keep in touch until everything wakes up again in September. So this coffee morning was a sort of practice run and it was lovely. There was a really good turnout, and despite a heavy storm the day before, and plenty of lingering cloud, we  were still able to sit around outside and just enjoy one another´s company. 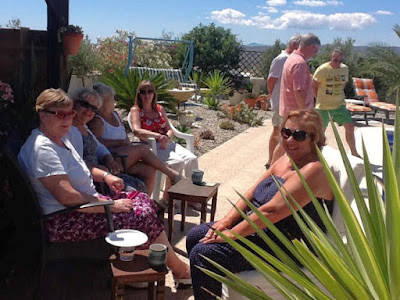 And coffee mornings are not just for the ladies. There were quite a few men folk there too. These three seem to be enjoying themselves. 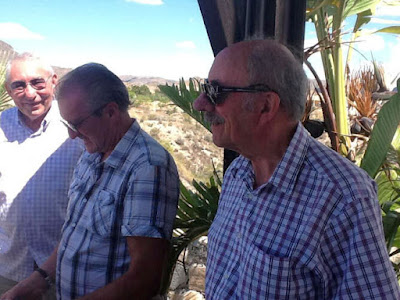 Some of us said we would take along a plate of something to share with our coffee and there was an amazing array of food. Remember this was just a coffee morning, not a party, and I took this when only about half of us had arrived. There was way more by the time everyone was there. 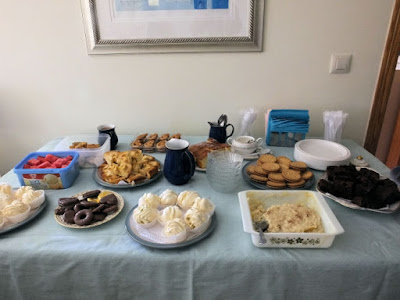 I have to say, we did it justice, and there wasn´t much left by the time we went home.
You may recognise the venue, because it was at the same home as the party we went to last week. My friend Pat and I decided to try the pool again in daylight this time, but we had quite a shock. It was a lot colder than when we swam at around midnight last week. We checked the thermometer and the water was only 22º! It has been up to 27º which is a lot easier to get into. But we had decided to swim so we just went for it, and before long we had got used to it and it was quite pleasant. 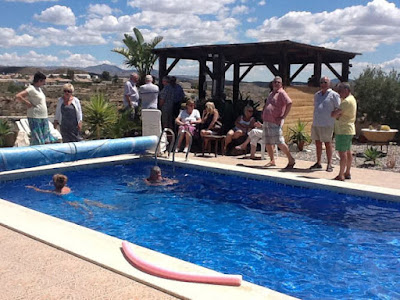 Most of the others were happy to stand around watching or laughing at us, but our hostess did join us for a while.

I am grateful to our local dentist who turned out to be a very nice man. He was patient and careful, and after an hour and a half in his office yesterday, and the same today, I have a had a root canal filling with no pain or discomfort at all, and after one more session next week to reconstruct the tooth above it, I shall be done!

I still lack confidence when speaking in Spanish so every little success is a triumph. This morning I was in our Farmacia collecting my monthly prescription when an elderly English woman came in with a used syringe that she wanted destroyed safely. The assistants thought she wanted to buy some more and didn´t recognise the writing on it, so I was able to explain to them that  it was just for safe disposal. They all beamed at me and were so pleased, and it gave me a little lift to be able to help, and to be properly understood for once. Small steps, small steps, but I am getting better every time I try!

So now I have one sky photo to end with. It is nothing special, but as I glanced out of my craft room window I saw this face looking back at me. My husband can´t see it, so maybe it is just me... 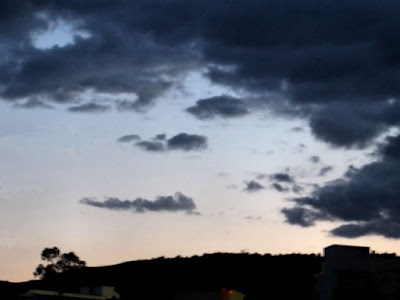 And on that note, I will quickly link up with Annie´s Friday Smiles and Rocking Your World over at Celtic House, (and it is still Friday in UK!), and then I am off to find my bed. I´ll be back tomorrow to visit you and enjoy all your happy photos etc. Good-night all!