I am sure you will all love my photo today. After all, who doesn´t like a teddy -- or ten -- or twenty even!! 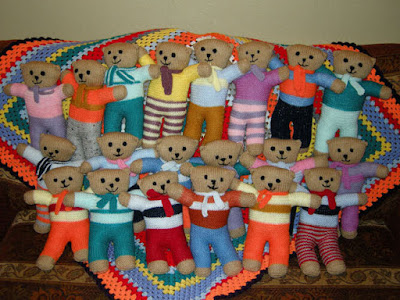 Don´t they look fun! This is the pattern that Brian asks us to knit for my Africa project, because he likes to give one the same to every new-born. I don´t make them. They are a bit fiddly for me and I hate trying to put nice faces on all of them. But Ruth, one of my friends from my sewing group, has made all of these, and her sister does their faces. They sadly lost their mother last year, and she had been interested in their knitting and had bought some of their wool, so they decided to finish what she had started and add to it, in her memory. Together they made one blanket, several jumpers, lots of hats and these teddies. I am not sure how many there were of each, but I know the numbers were significant. Ruth lives out here, in my village, and her sister lives in UK, so a couple of weeks ago, when Ruth was on holiday in UK, the two of them visited Brian and Barbara to deliver their project in person. Here is Ruth, handing some of it over to Brian, Barbara (far left), and one of their workers. 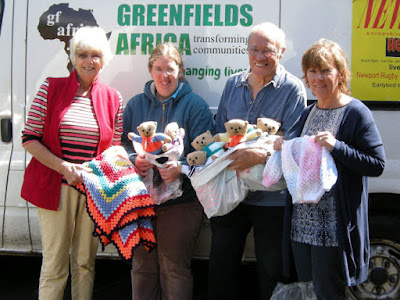 Didn´t they do well? And Ruth has also been a great help to me here. Together with two sisters Gloria and Selina, they have been taking away bags full of squares, and when one has sewn them together to make a blanket, another has crocheted around the edge. Meanwhile I have been busy adding rows of squares around pieces of work that I have been given, which are too small to stand alone, but much to nice to sit around unused. So with a few added squares, and a crocheted border, they too have been made into blankets. So although we sent our big consignment for this year with my courier friend last month, already we have another ten blankets ready to go. I am going to squeeze two or three into my case when I go over there next week, and hopefully I will also be able to meet Brian and Barbara in person. Ruth is over there again in August, and this time she is driving over, so she will take any more that we have if she can make room for them in her car. Then we will have a bit of a rest over the summer, and start knitting for the next big consignment again in the Autumn. 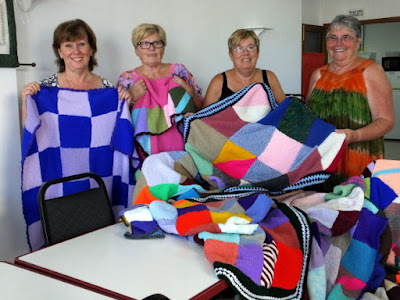 I am sure you don´t really want to focus on this, but we are now half way through the year. Our oldest son Jim is celebrating his birthday today, and I once worked out that today is the exact middle day between last Christmas Day and the next one! I said you wouldn´t want to know! So here is Jim in a rare photo with his son Marcus. Jim is a vicar near Wolverhampton, and his little ´flock´sometimes refer to him as ´the hippy vicar´because he wears his hair long and usually has a cowboy-style hat on, and torn jeans (under the clerical robes that is!). It is very rare indeed to see him looking quite so smart but there must have been a special occasion! 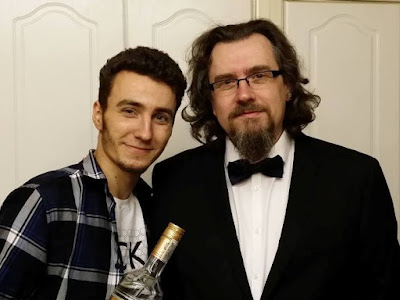 This week has flown past, probably because I still have quite a lot to do before I go away on holiday. But today I got out my sewing machine. It only sees light of day once a year, if that.

But I have managed to  mend two shopping bags as a 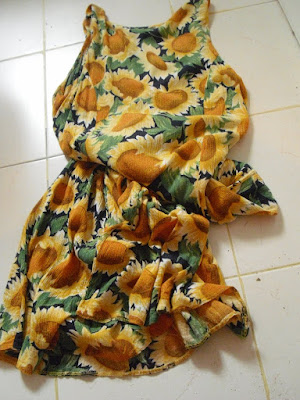 ´warm-up exercise´, and then I have mended my favourite dress which just has to last for one more season at least. I bought it at Wembley market around thirty years ago. At the time I was teased a lot for wearing it, but now everyone is more colourful, and no-one bats an eyelid when I turn up in it. It is thin enough to shoot peas through now (as my old mum used to say!), but I still love it, and will be very sad when it is worn beyond repair. I have also altered one dress and now I´m working on another one. Then my machine can hide away in the cupboard again for another year!

We had a lovely evening on Wednesday when our choir had their last practice before the summer break and we invited friends and family to come and listen to us singing through our whole repertoire - so far. More songs to learn when we return in September. This is the only photo I am showing as we have agreed not to publish online any video clips etc until we have done our first ´professional´concert. This was just a normal practice session, but with an audience. Of course there were a few little things that we still need to work on, but on the whole it went really well. There were lots of lovely comments afterwards, and some people saying "We didn´t expect you to be so good, not yet anyway". 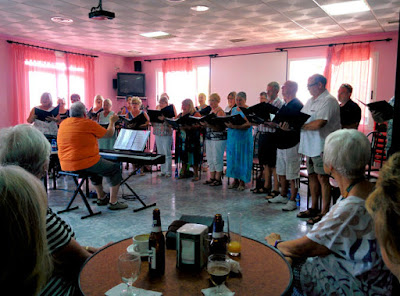 So here we all are. As you can see, there are only about twenty of us, and we have only been together for seventeen weeks, so really we have done very well to get this far. I thoroughly enjoy being a part of it.

After this weekend we have a couple of months of doing very little. My Wednesday sewing group continues to meet through the summer, but everything else comes to a stop. It is very hot now, and there are weather warnings of exceptional temperatures for the next two weeks, so we tend to stay indoors and rest in the afternoons, and wake up again at tea-time. There´s a lot to be said for siestas!!

We seem to have entered the season for praying mantis! We have seen several of them around the yard just lately. Of all the bugs, these are one of my favourites. They are such an odd shape, and so very agile, and they eat a lot of the less welcome bugs that are around too. As I got my washing down from the line today, one little green mantis jumped off a cloth onto me. Then he ran all over me like grease lightening before I could shake him off. He was a very small one, but yesterday one just a bit bigger was having a supper of red saw-fly caterpillars on my roses. These caterpillars suddenly appear on a rose bush and can strip every bit of leaf off it in a couple of days. So I was happy to see a mantis feeding on them, but I was out there to hose all the plants, and I hosed the rose before I saw him, so he hopped down and ran away. But I expect he was back as soon as I had turned the water off. 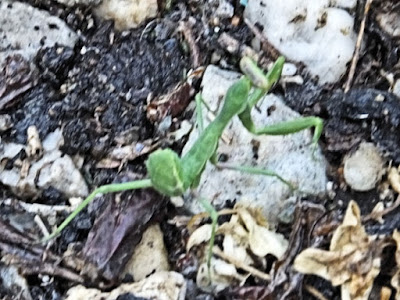 With the temperature hovering around the mid-thirties all week, I have been grateful for our pool to cool down in. I had my first mid-night swim the other day. It is a lovely way to cool right down before falling into bed!
I have also been grateful for the slower pace of things which means we have had time to sit and chat with friends more. After our sing-a-long on Wednesday we sat outside the bar where we practice, and chatted to a couple that we have known for years, but they live a long way from us, so we rarely actually get to talk. We ended up sitting there until nearly mid-night. While we were chatting I was watching the sun set behind us, but as so often happens there, because it is nearer to the mountains than we are, there were clouds gathering all around, and much of the sunset was lost behind them. I only had my phone with me but I did manage this one photo. 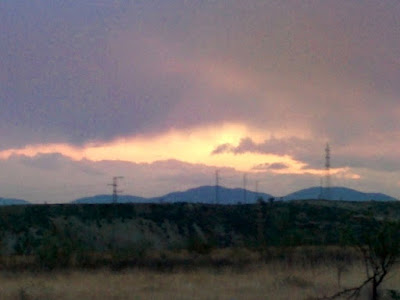 I am sitting here with the ceiling fan and the floor standing one one, and I am still too hot. So although I should go back and try to finish my sewing, I will just link this up with Annie´s Friday Smiles, and Rocking Your World over on Virginia´s blog, and then I think I can hear the pool calling.

I´ll have to get busy at the machine tomorrow morning, as I also need to do some ironing and have my case more or less packed by bedtime. On Sunday I will be at church in the morning and we are following the service with a fellowship lunch which we have signed up for. On Monday I need to do some basic shopping so I leave the cupboard stocked for our house/animal sitter, and then we have a lunch time birthday party which will probably go on all evening. So I can´t see me getting much done on either of those days.

On Tuesday we will have to leave by 8.00 in the morning, to drive to Murcia airport. I have a busy week with something planned for each day while I am in UK. I am looking forward to seeing our four boys who all live in the Midlands, and to meeting our newest great-grandson, born late December. The next week I am flying on to Denmark to see the son who now lives out there, and Chris is flying out to join us there. So I will probably not be posting for the next two Fridays, but be warned - there are bound to be lots of photos to show when I get back!